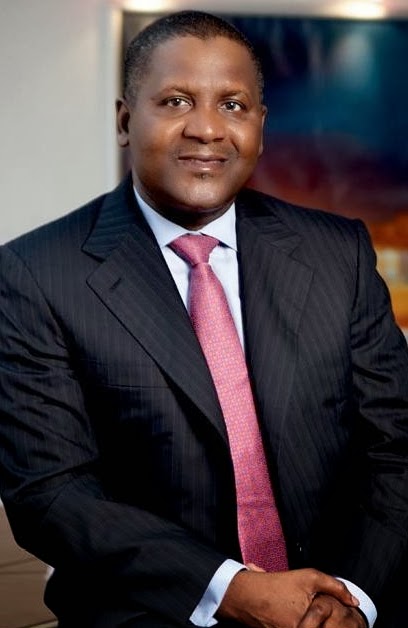 March 24, 2014 – Dangote’s Wealth Secrets: How To Become A Nigerian Millionaire Like Aliko Dangote By Peregrino Brimah

I was recently called to approve of a very handsome advertising offer from the D. Group in a magazine I edit. It was really good money. I told the online magazine to politely reject the offer. It will be better we stay broke and poor than partake in his filthy wealth and lose our principles and dignity, I told them. On one condition can we accept to run his ads—if he promises to reduce the extortive price of cement for all Nigerians by just 20%, we will run his ads for free for him for one whole year.

Nigerians have a problem. We praise and appraise anyone with wealth without realizing and questioning the source of their wealth…whether or not it is from our inheritance and stolen from our suffering and dying parents. This sycophancy and celeb-worship renders us—as a society—hopeless, worthless, denuded and condemned to a second-class life of misery, begging and poverty.

The problems Nigeria faces today with the oligopolistic cabal were faced by the United States earlier in its history with the Robber barons and the rise and wars of the labour unions. One only hopes and prays that Nigerians wake-up now, and Nigeria will not be saved from its Robber barons by a tortuous and arduous, bloody and luck-dependent process as happened in the United States. If you know our government is evil, what do you call the cabal—who literally own the evil government and work behind the scenes to ensure the government protects their interests and their ventures to our permanent detriment? These same cabal were behind our worst dictators and again selected, sponsored and have been behind our terrible politician regimes including this one.

To explain my position on Dangote, I here present the 10 secrets to being a successful Dangote, the true edition:

1. Get a powerful government friend, preferably the President. Aliko Dangote got Obasanjo. Not his second term but since his first term at the head of the government. It was during Obasanjo’s military rule in the 70’s that their partnership was kindred and Obasanjo first gave Dangote sole-importation rights.

2. Ask your government friend to give you sole importation or manufacture rights. Dangote first got this through Obasanjo in the seventies. Choose an essential commodity, not a luxury. Choose food, cement, roads, cars, mobile phones/internet, anything Nigerians cannot do without so the government can impose your monopoly on the people and they will have no choice. A dollar-a-head multiplied by 168 million Nigerians. Voila! World billionaire!!!

3. Ask your government friend to also give you zero-barest minimum import tariffs on all equipment and materials you wish to import. Dangote practically owns his own ports.

4. Next, get your government friend to promote and secure your company to be the only ‘business’ allowed to manufacture and sell whatever product you are engaged in. Cement, rice, etc. Dangote according to reports admitted that the Nigerian government once got him to import so much rice, it crashed the local market. Do this and you are on your way to your first billion.

5. Secure your position by sponsoring and collaborating with all governments, military or civilian. When it comes to politics and political parties, as Dangote does, sponsor both sides, whoever will take your dirty money; so whoever wins, your oligopoly is secured.

6. Privatization: Buy state assets at a fraction of the price from your government friends, who are by now secret investors and share-holders in your business. Have the government refurbish these assets for trillions and sell them to you for one-tenth of the price.

7. Kill Competition: Now that you have benefited immensely from the generosity of the government and nation, have the government permanently ban all competition. For instance, ensure that there is now a very high tariff on the import of cement so no one can compete with your monopoly.

8. Be ready to blackmail. Anytime a competitor successfully imports even a single bag of cement, close a small branch of your company and announce in the papers that 1000 workers were laid off/sent to rest because the import of that bag of cement ‘crashed prices’ and so there will be an unemployment crises. Dangote loves this one. Anytime Yar’Adua or other President pushed him to reduce his exorbitant prices that defied the laws of supply and demand, he quickly temporarily shuts a plant down to blackmail the president with the fictitious unemployment crises.

9. Set your prices triple the price for that commodity before you got involved and triple the global average price. For instance, sell your cement at $12/bag when everywhere in the world it sells for $4-5/bag. Even imported cement sells for $4-5/bag in Nigeria. But since your monopoly is protected by your politician friends in power, you are free to set your prices as you like to crush and deplete the masses of their money while declaring double quarterly profits for your government and foreign share-holders…as Dangote always does. People will believe it is the cost of doing business in Nigeria. Fool them, though you know that every other businessman who likewise does business in Nigeria, competes with global costs, keep declaring your double profits, enjoying cheap labor, free land and no tariffs. Get rich by making your countrymen poor.

10. Keep it running: Stay out of direct politics; do not make the mistake of Abiola. Stay on the sidelines, be the one to choose and sponsor candidates into the parties; publicize yourself as a charitable employer of labor. Keep sponsoring political candidates with back-door deals for them to handover the nation’s oil wells, resources, land and the people’s pockets to you. Help politicians invest and launder their money.

Two Islamic hadiths that Dangote wannabes can relate to:

Abu Huraira narrated that the Prophet said: A time will come upon the people when one will not care how one gains one’s money, legally or illegally. (Bukhari)

The Dangote business model some are understudying can never make a penny outside Africa. Check his money making ventures—all are local. In America it takes ingenious thinking, brilliant ideas, discipline and skills to become a renowned millionaire. In Nigeria it takes shrewdness, dirty bloody money and corrupt connections.

Unfortunately for those who have been reading the recent out-pour of press by Dangote, supposedly teaching them how to be successful entrepreneurs: know now that your ‘teacher’ is your worst enemy. Dangote will block you from establishing any business in Nigeria. We all will ultimately soon be his glorified slaves (employees) until and unless a true Nigerian civilian or soldier leader breaks the cabal monopoly. Our current administration as with those in our past, is more evil than is easily seen. We do not notice and there is little press when they lock us in binds to be openly robbed and extorted by the cabal. The government never supports healthy, necessary competition to protect the interests and prosperity of the masses; and the cabal are so heartless they will usurp every advantage given by the desperate and insensitive politicians they bought into office.

Till we are delivered or deliver ourselves from the claws of these government-partner monsters, we must all say no to the cabal. We must avoid their goods as much as we can and patronize competitors even if their prices are a bit higher. It will pay in the long run if we do so. A little hunger today will secure food for our children tomorrow. This is our only chance.

About the author: Dr. Peregrino Brimah,
https://ENDS.ng [Every Nigerian Do Something]
Email: drbrimah@ends.ng Twitter: @EveryNigerian