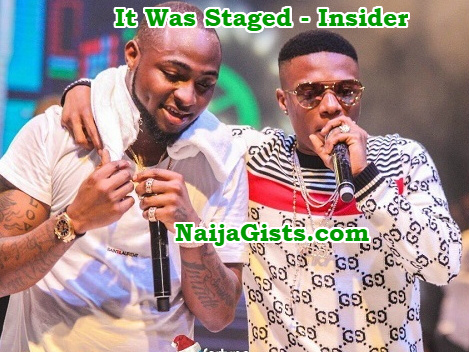 History was made at the Eko Hotel Convention Centre in VI Lagos last week Wednesday the 27th of December 2017 when two rivals reconciled after settling their bitter feud.

Thousands of fans in attendance witnessed Davido bring out several acts to perform for the night. And just right before bringing out WizKid, the DMW boss bellowed;

”Would you like to meet my new best friend?” to which everyone heartily yelled. Wizkid soon emerged from backstage and the two embraced.

Wizkid went on to perform one of his recent street jams ‘Manya’ alongside Davido, raising the ecstasy in the atmosphere several notches higher. WizKid soon gave Davido a hearty shout out before exiting the stage.

30 Billion Concert was a night of exemplary artistry and entertainment witnessed by a mammoth crowd.

Just as the dust settled, entertainment insiders are now claiming that the duo were paid to stage the drama in order to make the night more interesting.

Both artistes are known to be harsh rivals in their musical careers, as the two top contenders in the Nigerian hip hop genre.