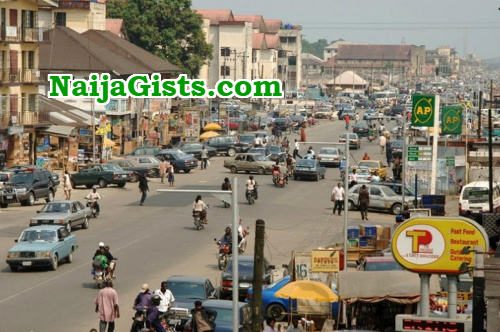 May 9, 2017 – The Day I Gave Up On The Future Of My Beloved Country, Nigeria – By Femi Akinfolarin

Saturday May 6, 2017, was the day I finally and wearily gave up on the future of my beloved country, Nigeria. I remember clearly sitting on my living room couch, powering on my laptop and stumbling upon the online news article about two secondary schools in Ikoyi, where as part of celebration activities following their completion of their final school exams, male students decided to assault and rape female students, while being egged on by their fellow students and filmed by security guards in nearby buildings. Sounds like something straight out of a horror movie from some nightmarish Stephen King flick, but it happened in broad daylight in the middle of a highbrow part of the biggest metropolis in Nigeria.

Imagine this scenario: You are a student of Falomo Senior High School, a girl’s only institution in Ikoyi, a good neighbourhood, with relatively good teachers, and you have just completed your final exams. Your future looks rosy. You are already thinking about university and what courses to take and how much you will enjoy leaving your family home for the freedom of hostel accommodation. Yet, barely moments after completing the said last paper and packing your bags to head out to a life of promise, some brute from another secondary school in the neighbourhood corners you in broad day light, and mounts you, while a crowd of his male peers watch on and applaud. He then proceeds to brutally cut up your clothes with scissors and rape you. Meanwhile, security men in close-by offices are also part of the crowd watching as you are brutally violated. Although one is not certain of the information at this point, but there is speculations that this is a yearly tradition in the school. What madness!

The above scenario happened to nearly 60 girls last week and could have resulted in the rape of all of them, if not for the intervention of a Good Samaritan, Mrs. Michale Mathews. From her account, at least one of the girls was raped. The others were molested with their clothes viciously torn, their bodies touched inappropriately, before being protected and helped to get away from the overly confident assailants.

The whole situation is completely crazy! Where does one start to consider this from? And, to think that only one daily paper has deemed it fit to carry the news, as at this morning! That there is no nationwide outcry on this violation! That this incident only came to light because a solitary woman watching from her office window saw the assault, and decided to act and fight the guys off the girls. That this happened in broad daylight in a highbrow area of Lagos (imagine what could be going on in fairly rougher neighbourhoods)! That security men stood by and only chose to record the incidence, while doing nothing else. That the teachers in the school did nothing to prevent or stop the rape. That the boys who launched the attacks were brazen enough to carry this out in daylight. One then imagines the extent of the trauma being undergone by the raped girl and what the impact of this would be on her life going forward. This is unspeakable evil that can and should never be acceptable by any standard.

Ultimately, our leaders in the National Assembly need to speak out and legislate tougher sanctions against rape in all its dimensions, while our president and state governors launch campaigns against this scourge nationwide.

In 2012, in Delhi, India, a number of young men tricked a girl and her male companion into their bus and then proceeded to rape the girl continuously, while driving up and down the city. The male companion suffered bad injuries but the girl subsequently died! There was a massive outcry and the men were caught and made to face the full force of the law. It became a global story and India changed its rape laws because of this and a few other episodes! In Nigeria, we are barely discussing this incident despite the fact that news about rape is steadily becoming a daily occurrence in our society. Recall that a few weeks ago, a man in Kano raped a six-month old baby and after that some other madman raped a seven year old girl. Rape is becoming increasingly prevalent across Nigeria and the sooner we speak and act against it, the better. Also, one is amazed at how less of an interest this story generated, in comparison to the story of the artist, Banky W’s engagement, which virtually brought down the Nigerian social media space last week!

Finally, the prevalence of and acceptability of the rape culture amongst our youth portends disaster for our country in the near future. The current demographic distribution of Nigeria reveals that; 42 percent of our people between the age of 0 to 14, while 19 percent is between 14 and 24. That means that a total of about 79 million, out of a total of about 170 million people, are 14 and below, while 36 million are between the ages of 15 and 24. The gender mix is some 59 million males to 56 million females. The implication is 50 percent of about 79 million people within the youth segment, are male. Hence, as the idea that the rape of a woman is okay becomes more and more acceptable across our national spectrum, we have quite a huge youth population up to the task of carrying out rape in society, if considered right. Even if 0.5 percent of these youth decide that rape is acceptable, we would have still three million males under the age of 24 who might chose to rape our daughters and wives whenever the opportunities present themselves! What a nightmarish scenario this could be!

I plead with the Lagos State government and the Nigeria Police Force to look into the possibility of closing the male school involved in Ikoyi until the students are morally rehabilitated. I want them to consider the possibility of seizing the results of all the students proven to have stood and watched the assault on the girls; prosecuting every male student aged 18 and above who took part in the assault and or rape; and finding out what the principals and teachers of the two schools knew about this incident. Further to these, the school staff should be prosecuted if it turns out that they were negligent in their fiduciary duty to protect their students, especially if its discovered that there is a tradition of this sort of assault. Ultimately, our leaders in the National Assembly need to speak out and legislate tougher sanctions against rape in all its dimensions, while our president and state governors launch campaigns against this scourge nationwide.

7 thoughts on “The Day I Gave Up On The Future Of My Beloved Country, Nigeria – By Femi Akinfolarin”