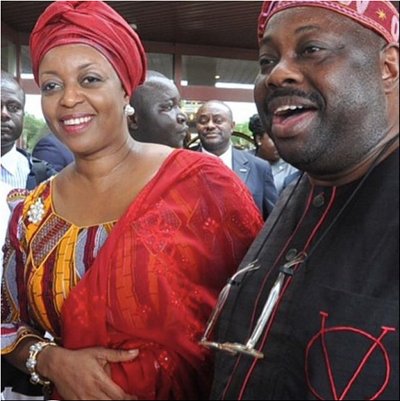 Less than 24 hours after ex-Nigeria’s minister of petroleum, resources Diezani Alison-Madueke’s interview with Ovation International publisher, Dele Momodu hit the airwaves, rebuttal to her claims, has started pouring out.

Diezani, who is now battling cancer had told Dele Momodu in the said interview that no money was missing under her watch especially the much publicised $20billion, which Emir Sanusi Lamido Sanusi, as CBN governor, had told the nation, developed legs and disappeared from the country’s coffers.

She also said Sanusi may have erroneously believed that it was her who frustrated his ambition in becoming the president of the African Development Bank (AfDB), saying that it was Jonathan’s men that stopped his bid.

However, his rebuttal, said that Diezani was not telling the truth. He insisted that she knows that monies running into billions of dollars were missing under her as the Minister of Petroleum.

“The question Diezani has to answer is: “Was there $6bn said to have been remitted to NPDC which they denied? As for that denial, who is holding that money? What happened to the inflated N6 per litre kerosene subsidy? Where is the money said to be paid to that effect? All these questions formed the basis upon which I was suspended and denied the AfDB job,” he stated.

Emir Sanusi reminded the embattled former minister that what he did was neither a personal war nor was it targeted at anybody. He declared that if anybody is affected by the revelation, he or she should come forward and clear their name.

“Certainly, this is nothing personal. It is our nation’s money we are talking about. One cannot take away the treasury and expect to go scot-free. He must answer the basic questions. Everyone is aware that I was punished by former President Jonathan for exposing the missing $20bn.”

The Emir said he was denied Nigeria’s backing for the AfDB job because of the $20bn allegation, adding that it was on record that a week after he exposed the matter, Jonathan wrote a letter withdrawing his nomination as Nigeria’s candidate and replaced him with then Minister of Agriculture, Dr. Akinwunmi Adesina.

Sanusi said it was not a hidden fact he expressed interest in the AfDB job when the position became vacant. He noted that while he expressed lack of interest in a second term as CBN Governor, he wrote a letter to Jonathan and the Senate and also discussed his AfDB ambition extensively with the Ministers of Finance, Dr. Ngozi Okonjo-Iweala, and the Attorney-General of the Federation and Minister of Justice, Mohammed Adobe.

The monarch further explained that his meeting with Jonathan on the AfDB job was witnessed by the former President’s Principal Private Secretary, Hassan Tukur. Sanusi recalled that Jonathan even directed Hassan to start campaigning for him among African leaders, which the aide did by writing a letter to one of them.

“It is not something that is hidden that anybody who is seeking that job must get the support of his country. Knowing fully that I went to the President with my intention and before I made the exposure of the $20bn oil deal, Jonathan clearly declared his support for me. He even directed Hassan Tukur, his Principal Private Secretary to write to African heads of state. So, what is Diezani saying? One can now see that she is lying.

“My suspension came a week after I made the disclosure of the missing monies, precisely on February 20, 2014. As at that time, I was the only candidate from Nigeria gunning for the AfDB job, but you know one cannot have it when he is suspended. My passports were all confiscated. Jonathan, in trying to punish me, denied me of the job and replaced me with Akinwunmi Adesina, who happens to be my personal friend.”