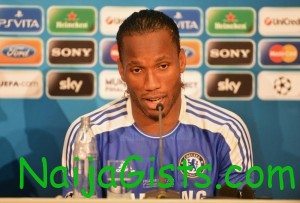 The striker has been quoted saying he informed his team-mates of his decision during the club’s open-top bus parade on Monday after leading them to the greatest moment in their history on Saturday night.

Drogba, who has reportedly already agreed a deal to join Shanghai Shenhua when his Chelsea contract expires this summer, is said to have admitted he struggled to get the words out and burst into tears.

“We will no longer be together next season,” the 34-year-old said in quotes attributed to France Football magazine.

“As I decided to leave, I wanted to tell them straight in the eye. Except that I could not do it. They made me crack.

“Even though it’s been three years since I said I wanted to leave, I find it hard to admit that it’s over with this club – especially as I did not feel like this.

But I could not see myself sitting on the bench to watch others play when the club plans to set up a new team.”

What do you think about his choice ? Let’s discuss Chelsea fans