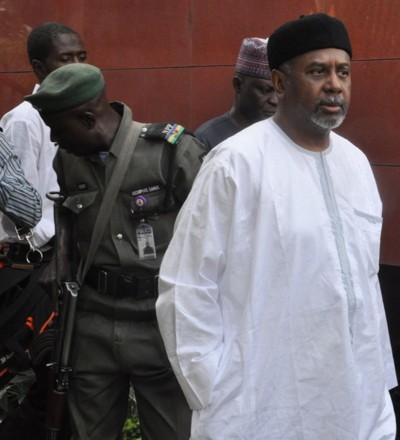 December 31, 2015 – Drama As Sambo Dasuki’s Wife Breaks Down Crying As DSS Re-Arrests Husband, Pleads To Nigerians To Come To Her Aid

The wife of ex-NSA on Tuesday caused a scene at the headquarters of DSS in Abuja when she begged top officials of the agency to not allow her hubby to die in their custody.

Mr Dasuki and other family members of Dasuki had waited waited patiently for Dasuki to meet the last peg of his bail conditions, a surety with about N250million property.

But immediately Dasuki was released at the prison, he was re-arrested by the DSS.

After several hours of trying to locate her husband, she returned to the DSS office and demanded for him or in the alternative, she should be locked up with him.

“Nigerians should help me beg the Federal Government, the DSS and other agencies to release my husband who did his best to serve this nation. He is ill, he needs medical attention, he is not pretending. I implore the DSS not to allow him to die in custody.

“I saw my husband and I felt dejected. He is not just well. Nigerians should assist him to get a reprieve. We(myself, the children and relations) are all destabilised. We don’t know what is happening because three courts have granted him bail. Why are they after him? Let those concerned respect the court by releasing my husband.

“There is no way my husband will run away from the country under any guise. They should please follow the rule of law and uphold his right to bail.”