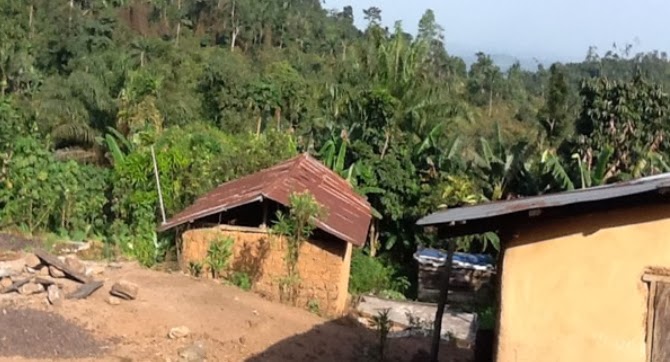 Olobeide, a village in Ikeji- Ile, Osun State was recently hit by an explosion that sent old and young scampering to safety. Two months after residents of the rocky community are yet to get over the scare. Taiwo  Abiodun  reports.

The cock had just crowed at 3 o’clock on September 23, a Monday. The farmers and the traders who mainly dominate this town knew at once that they should be getting ready to set out for the day’s work. Seconds later came a massive explosion. The earth shook, the houses vibrated. No one could have missed the impact.

By now everyone had woken up, asking the nearest person what was happening. There was no precise answer, only gesticulations that indicated nothing.

In twos and threes, the panicked residents stepped out of their houses to ascertain what had happened. What they saw next would only confuse them and terrify them the more: water gushing from the top of the rocks and cascading down. Trees were uprooted and flung away, some over 100 meters. Food and cash crops were not spared.

There was no need for further probing; the race for survival had begun. Some fled into the bush: some just kept running, to nowhere in particular. Some were practically nude. Mothers reached for their children, all screaming and running at the same time.

The explosion had blasted off the top of the rock, leaving a huge opening through which the water gushed out. The base of the rock was littered with gravel.

Olobeide village has 12 mud houses and about 200 inhabitants who are chiefly farmers. It is nearly three kilometers from Ikeji- Ile. The town is surrounded by rocks which seem to be competing for space with one another.

A resident, Pa Oladiti Isaiah Ajayi, said of the explosion:”It was in the early morning around 3.00 am on September 23 when we heard a deafening explosion that sounded:’graagra gbagbagba gborogodo gba, ya, ya, ya, yooo.’ It was terrible, it woke us all up!

“And then we heard the sound of flood rushing down on us. We started running helter-skelter. In the morning we all went to look round but lo and behold there was a wide range of a big gulf with uprooted trees flung away.”

Ajayi, who said he has been living in the village since 1963 added: “ I am a farmer planting cocoa, kola-nut and others .We were shocked .Most of the residents ran away and abandoned their children though some came back to take their kids. I advised them against running away; I told them that nobody should run and that there was water all over the place. I’ll keep telling them that it was the ground that opened and caused water to come out. For one week, the water kept gushing out.”

He recalled that the explosion was preceded by a tremor.

“The entire village was shaking (trembling) the previous night until we heard the blast that woke us up. There was a tremor but we were all sleeping when it happened. We are about 200living in this village.

“We didn’t know what could have happened but once in a while we would some sound coming from the rocks. The explosion destroyed so many things we cannot quantify now. About 30 farmers lost their crops. Such a thing has never happened before.”

Another resident, Elizabeth Ajayi, said: “We were sleeping when we unexpectedly heard ‘ waa,wa waaa wooo’, and we all ran out. In fact I forgot my children behind for it was unexpected until we were asked to go back for it could be water. In the morning we went to Ikeji-Ile to inform them about what had occurred.”

Prince Segun Ogunmokun, a retiree, farmer and politician said: “Immediately I heard of the eruption, I called Bola Ilori, Special Assistant who is in the Ministry of Environment in the Osun State Government. He demanded for some pictures which I sent to him but up till now I have not heard from him. We need an expert to discuss this and tell us what actually happened.

Hon. Busayo Akinsuyan said:’’ I learnt that this is not the first time. In the past a small portion burst about 13years ago. We were told that the water that gushed out was smelling and hot.

“The actual place where this thing occurred has rocks, big trees, crops pulled out and the place is still soft till now. If it had happened in the cities we would have been saying a different thing. The place looks like a bulldozer came there to work. This is an act of God. I believe there is a large water storage which forced itself out from under the ground, or there was some chemical reaction.”

Retired Major Owoeye Abiodun described what happened as a mild volcanic eruption. “Naturally, a volcanic eruption would occur when the earth moves. There is tendency of an eruption where the earth is weak. In every part of the earth, we have certain movements under the ground when it will form a radius and we find small explosions, but if the explosion is big we will be able to identify a volcanic eruption, but if it is mild we would say it burst,” he said.

“There is what we call molten lava; much of the hot lava is continually moving .We are very lucky in this part of the world for all these activities are mild. In 1985 there was a mild quake in Ijebu- Ode down to Oke -Ado in Ibadan when there was a tremor

“When the bed of hot lava under the ground comes to a point where it is weak, it will burst and come up but when it is a real volcanic action it will cover a wider area and it can destroy a whole town.”.

A soil scientist, Emmanuel Olayemi, argued that it could have been caused by the movement of hot water under the ground that could no longer contain it.

“There are some elements in the ground which can cause this .We need to investigate. The water which was said to have come out from it had a foul smell and should be taken to the laboratory for tests.”

The villagers would no doubt be hoping that Osun State government officials would initiate urgent investigations to determine whether what occurred was a localized phenomenon, or whether there are other areas where such volcanic activity could occur and endanger lives.