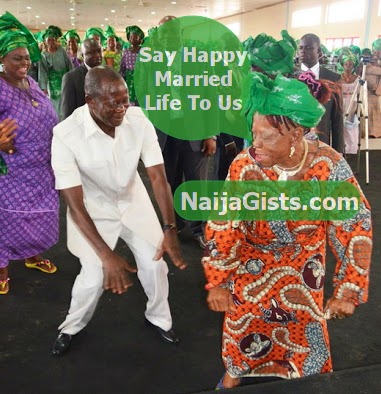 4 years after losing his first wife Clara to cancer, Comrade Adams Aliyu Oshiomhole has picked a new wife for himself. He stepped out with his new wife at the 50th birthday celebration of Toyin Saraki, the wife of Senator Bukola Saraki. The party, which took place in London, had many political gladiators in attendance. Most of them were at the party with their wives, and so also was Comrade Oshiomole. It was with utmost joy that he introduced his wife to his friends and associates at the party.

The new wife is reportedly to shuttle the state house and the comrade’s hometown in Iyambo, Edo State.

Sources disclosed that Oshiomole’s new wife, is a native of Urhomi, and is a Law graduate of the Ambrose Alli University, Ekpoma. Already, a secret traditional marriage took place at her parents’ home in Urhomi a few months ago.

Though details of how they met are still very sketchy, The ELITES gathered that the relationship was established shortly after the death of Oshiomole’s wife.
According to sources, the marriage is only known to a few in the government house, but it is affirmed that the new wife comes around to spend time with the governor. And during the week, there are claims that she stays with Oshiomole’s mother in Iyambo.

It will be recalled that Oshiomole’s late wife, Clara died on Tuesday, December 7, 2010, at the Abuja Clinic, Maitama, after a protracted battle with breast cancer. She was aged 54.
Clara’s marriage with Oshiomole was blessed with five children: Cyril, Winnie, Jane, Steve and Adams Jnr.