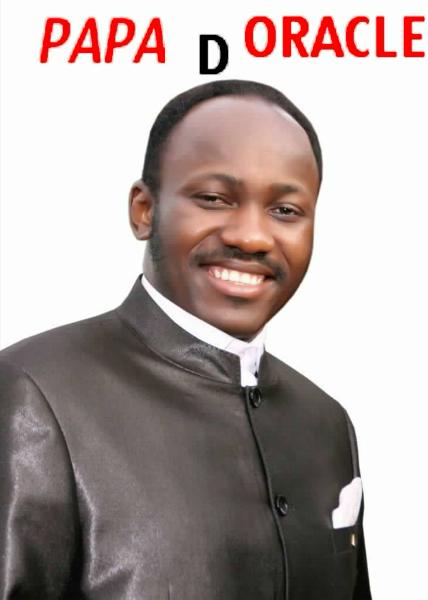 Another Prophet has released his own vision for 2015. Johnson Suleiman popularly called Papa D Oracle is the founder of Omega Fire Ministries in Auchi Edo state.

Check out his prophecies for 2015 below:

1.There shall be harvest of testimonies for women looking for fruit of the womb.

3. I see a woman becoming the president of America, but her health needs attention.

4. Britain needs prayers because of her Queen.

5. I entered the house of former president Shehu Shagari in the spirit and I saw RIP; he needs prayers.

6. There shall be agricultural boom this year.

7. I saw Catholic Reverend Fathers getting married. I saw a group rising, called “Old Catholic Church”, they were on fire for God and caused a revolution.

8. Boko Haram is sponsored by two people; one is a traditional ruler and the other is a retired General.

9. Nollywood should stop Unclothedness and immoral content been shown because God is not happy.

11. A great Pentecostal man of God been called to glory. I wept.

12. I see president Goodluck Jonathan coming back but troubles.

13. I saw people crying in the Oba of Benin’s house.

14. Libyan election to be cancelled.

15. El Rufai should go and sit down. For abusing Jesus, he will not win Kaduna election.

19. Dangote will not have it smooth this year; he will drop from Africa’s richest.

21. Egypt will have elections.

22. 2015 presidential election will be rigged, marred in violence and end up in court case.

23. Thank you Jesus! Finally a Christian is now the governor of Lagos state.

28. Rochas Okorocha; I saw him moving to PDP.

29. Contrary to most prophecies, Nigeria will not break up.

30. Nigerian Government will start fighting the Gospel and men of God.

31. Military leaders will be changed.

32. There will be plan to kill Goodluck Jonathan but it will be exposed.

34. APC Rivers State needs to do grass root campaign because I saw the election been rigged for PDP. Prayers are needed because of so much bloodshed.

35. Three popular musicians will die; one of them is a young boy.

36. Former President Obasanjo should go and make peace with God, Nigeria is not his problem.

37. The retired Army General one of the sponsors of Bokoharam, God warned him recently with his health. The next, God will take his life.

38. I saw a man win Governorship but not allowed to govern.

39. I saw attention in Delta state moved to Agbor.

40. President Gooluck Jonathan should arrest corrupt leaders. His calmness is what is empowering them to steal.

41. I saw people who resigned as ministers to contest election return back as Federal ministers.

43. I saw major death in China (I saw group of kids killed)

44. A great man of God whose first name begins with 3rd letter and Surname with 15th letter needs serious prayers. I saw serious crisis and crying. Please let’s pray for him.

47. I don’t see Buhari with credentials to vie for president.

48. Ghana economy to have terrible and serious crisis.

49. With the level of bloodshed I saw, it was better Goodluck goes now to his village quietly.

51. Arik Airline to pray against disaster.

52. I saw people crying in Alex Ekwueme’s house. Why are they crying?

54. Pray against three major Air disasters between February and October.

57. I saw Niger Delta militants become so powerful and influential in government.

58. God is not happy with Nigerian government for handling power problem.

61. Great men of god to rise in Namibia, Ghana, Nigeria and Europe