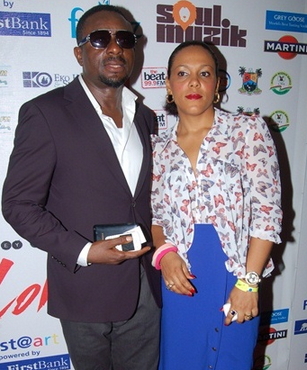 Nollywood actor, Emeka Ike is in the news again. This time, it is over his marriage with his entranged wife, Suzanne.

The matter is in court, and he is accusing Rev Chris Okotie of being behind his wife in the crisis, by hiring the services of a Senior Advocate of Nigeria (SAN), for the purpose of destroying his home.

In a telephone interview with Saturday Sun on Thursday, Ike said, he has refused to make comments on the matter, because of the future of their four children.

“I came from a home where my father and my mother lived together, and he never for one day beat her. I don’t want my children to be embarrassed, so I kept mute for over two years now. So, when people ask, I say nothing is happening; accepting everything to make somebody reasonable.

“You begin to ask questions, what is happening, and who is really interested in getting away with something evil in a decent society? I have not been doing anything illegal or illicit. The only issue has always been what I stand for; I am a firm man. I am a principled man. I build my life on the basis of integrity. So, when I say, ‘no’ people tend to say I’m stubborn. But nobody can say Emeka Ike threw somebody’s cup of garri away.

“For this matter, the court has justified my position by giving me judgment for the 13 prayers I made. It shows that I know what I was doing, I was acting on behalf of the system or the society and the court feels my position and said, ‘yes’, this is what it should be like. And when you see the judgment, you will say, ‘yes this is what it should be like.’
“Nobody should take advantage of that and put wrong information about me that I am beating my wife. What about my image? I worked for it all my life. Who is issuing the cheques, who is bringing out the money that is making this thing national news, who is that man putting money behind the press men?

“I sit in my house and I watch a television programme, where one presenter that should have known that the ethics of journalism is to be professional enough to call the second party did not even look at my side. The presenter and her panelist started calling me names. And that before God never happened. I felt caged in as a human being. Am I not locked-in by my profession? We are not mad people because we are entertainers.

“I have been begging because I want to save the image. And there is nothing more to say. Please, come back and take care of your children; somebody who used to look at their assignments when they come back from school; somebody who used to bathe them and get them ready for the next programme and work with the father, this is what we agreed. What is happening?

“You said you are not happy, you are having pain in your chest; I asked what do you want? She said she wanted to see a doctor. Let us go to the Medical Centre at Yaba. Let us go overseas to check everybody in the family. Let us go to Disney World to have fun to get back your grip in the marriage.

“People just get involved because it is a stout relationship, everybody gets involved. And if you have a very bad woman, sorry about that, there is nothing I can do about it. If a man’s wife could leave her house and begin to do all sorts of damage to his image, is that right in African context?

“And somebody will come and start saying Emeka Ike did this or not and he is called a bad man. Are there witnesses? Which neighbour will come and say yes? You don’t just wake up and say, constant abuses and then it goes viral, and a man begins to sponsor it; and every media house is reporting it as if it is big news, and that is a bad image battery.”

At the police station during interrogation, Emeka kept repeating that his major concern is the safety of two of his kids who were still in the custody of the wife. He said that he wanted all his children to grow in his house in Abuja under the care of his mother who lives with him. He alleged that his wife, Suzanne, decided to walk out of the marriage. He claimed that he was still interested in the marriage which he alleged was in turmoil because of the bad attitude of his wife and her irresponsible friends.

Also indicted was an Indian woman who was the proprietor of Emeka’s school.
The Indian woman, who was also dragged into the matter, said that she was the one managing Emeka Ike’s school at Magodo, Lagos, before it was closed down last year.
According to her, when the problem started, Suzanne was forced to take shelter in Mowe in Ogun State.

This was where she could get an affordable house and started her life all over again. It was in the process, that the accused man decided to assist her. She insisted that Emeka misunderstood the whole process.
Bitter at the situation, Suzanne said that it was a ploy to frustrate her so that Emeka can gain custody of their four kids. “I did everything possible to make our marriage work. He battered me at any little provocation.

I had to stay at home as a full-time housewife just to ensure that our children do not lack parental care while he was always on the move because of his career. He threw me out of the house and left with two of our kids. I had no choice but to hold unto the last two who were still very small. I did all I could as a mother to provide for them.