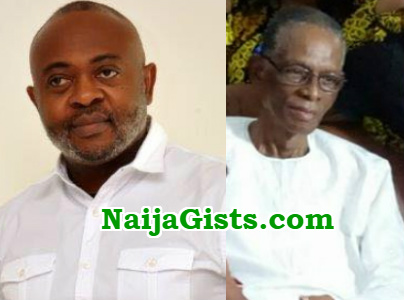 Chief Tunde Oloyede, one of Nigeria’s most accomplished and garlanded Television Producers, and husband of the ever so delectable golden voice, Bimbo Oloyede (formerly Bimbo Roberts) has passed on-and Nigeria just lost a gem, a rare gem.

Best known for producing the epic, Village Headmaster, Chief Oloyede was the CEO of Media International, where many world class, award-winning TV Commercials, Documentaries, Films and Soaps were produced.

Egbon, as I used to call him, was a simple, humble, unassuming, gifted, creative mind, a leader and manager of resources. He worked with the high and mighty, the ordinary and the lowly. His home was forever a beehive, with people coming and going, shooting and editing, cooking and eating and laughing.

A particularly handsome man and enchanting personality, Uncle Tunde was very kindhearted and generous almost to a fault. In spite of his rarefied perch in life, he won’t even hesitate to ask his Maiguard for money to buy groundnuts! That’s how much of a normal man he was. He was particularly kind to me, and guided me during a time I wasn’t sure I was right to still be on my job at Cadbury. His advice, well thought-out and grounded in sagacity, paid off handsomely.

Egbon, Rest In Peace! Rest, because your health failed unexpectedly and knowing you, it wasn’t a fight you loved to fight tried as you did.

May the Great Architect of the Universe, to whom you were forever thankful, be merciful to your worshipful presence.

Your legacy of hard work, commitment, tenacity, integrity, empowerment and excellence will live way, way beyond your earthly sojourn.

Auntie Bimbo, take heart; from Him he came and to Him he’s returned.