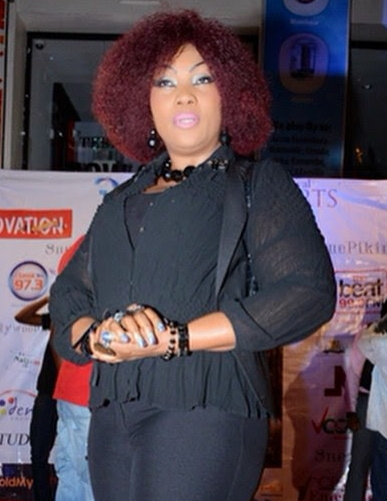 Your fans have been missing you, what have you been doing with yourself?

A lot of people have asked the same question. God Almighty said in the book of First Samuel 2: 20-30, “the Lord God is God of knowledge”. Knowing a whole lot of people sometimes may not have knowledge of something, they just make undue and unnecessary talk because they are not informed.

Well, I take it that things have not been in place in terms of advertisement regarding a lot of movies that I used to do before, some of the mediums of advertising the movies are the television – through advertisement – the radio and handbill. The advent of the laws that you do not deface your locality and the society plays its part, so a lot of movies have not been favoured.

When we talk in terms of finance, a whole lot of marketers and producers have come to think that to advertise their works is unnecessary waste of money. They think it is not necessary when maybe the finance to do that is not in place. So, I am saying all these because it is not to say that I have not been in the movie for a while, I have never stopped acting since the Lord established my gifting in terms of acting and modelling. By his grace I have been working, I know in the last two months I have done nothing less than three movies and I have not stopped working since this year and since my career started in 1996/1997.

So it is unfortunate that movies are not being advertised anymore or done the way they used to be. And the flyers are also not available because a whole lot of time people are producing movies or being showcased online, places like Iroko TV and Ben TV are here.

So that is why a whole lot of people are going to say, ‘oh where are the movies?’ I’m not saying that there is anything wrong in asking; it shows that you care. I want to correct the impression because the information is that she is no longer acting because she is a minister of the gospel of Jesus.

And I am saying no, the movies are there, I have been working and my movies are all out. I am saying the reason why a lot of people are not seeing the movie is because they aren’t being advertised the way they used to be advertised in terms of stimulating people to know that something new is out on the board. And God never said being a minister of the gospel prevents anyone from working.

One of your contemporaries said that Nollywood producers are frustrating the older artistes; do you agree?

Sometimes some people are not favoured to be in a particular project at a particular time, so if you are not being called to be on a platform to work that should not attract the insinuation that you are being frustrated, unless the person has some personal issues with the producer.

And for me, I have been on set with some of my colleagues, because I just finished a movie with Mercy Johnson before she went out. I did a whole lot of movies with people like Harold B, Mama Patience Ozokwor, Aunty Ngozi Ezeonu, so it is not about anybody frustrating anybody.

Sometimes you might not be needed for a particular character in a particular movie, it is not an everyday job as it were. It is a contractual job, when your season comes they will call you up and if your season has not come, you will wait for your time.

How did the turnaround for you occur faith wise?

I am only giving you background information; so it is not about how I became a pastor; nobody wakes up to say I want to be a pastor. If you are born in a Christian home and you get to understand that this is the precept of life and you begin to work in line with the Christian rules that means you should be in the sanctuary or the temple – we call it the church – and be in a closer worship with God.

And you will know that there is a particular place that has been mandated formally as a place of worship. March 1997 was the day I gave my life to Christ, that is what we refer to as ‘altar call’ – becoming born again or coming in agreement with God. It is not to say that I woke up and I said I want to be a pastor; there was a commitment on the day I heeded that altar call.

What is the name of the church or the branch you pastor?

I am an associate pastor with the Fresh Oil Ministry International Church at Egbeda in Lagos. I am an ordained evangelist as well as an apostle; I am a convent speaker in and around the country. I had gone to minister in the United States of America, a lot of West African countries, and I have ministered in a lot of churches in and outside the country and some churches and organisations invite me to be their speaker at their various meetings.

You graduated as a student of English from University of Nigeria; why did you choose acting? Was it for want of job?

Absolutely not! I did my first degree in English language at UNN and my master’s degree as a Social Worker at the Lagos State University (LASU). I realized my gift in time. If I had wanted to work at the Nigeria National Petroleum Corporation, in Ikoyi (Lagos) where I did my National Youth Service Corps I would have been employed there.

But I said to myself that I wanted to be my own boss. I realized that the Lord blessed me with this gift in acting because at my tender age at home with my siblings, I acted and danced very well. I thought I was going to end up as a great musician. This gift was what God blessed me with and I recognized it. While I was in the university, I was modeling.

I still model. Some of the friends I had at that time helped. I used to watch Kanayo O. Kanayo, Hilda Dokubo on television when I was about graduating from the university. It was a good friend of mine that introduced me to an audition and I realized that was where my passion lies.

It was never for want of job, it’s because I enjoyed the art of becoming who I am not. I realized that people were happy and forgot their problems when they saw me acting, so I keyed into it. So for me, it was a way to bring happiness to the people, it was all about passion.

What would you love to improve in the industry?

I want to implore the investors to come into the industry; a whole lot of people can come along too. I listen to interviews and I’ve heard people talk and they all keep talking about the ill of piracy; for me piracy cannot be cured when certain measures have not been put in place. Some gave analysis on why piracy is in existence and why it should be in existence.

If you pick Lagos State for instance and we assume that the population is about 20 million and the CD of a movie is supposed to be sold for N100, it means therefore that we need 20 million naira to meet approximately the demand of 20 million people in Lagos State.

Is there any plan of producing or directing your own movie yet?

Yes, I would diversify, but at the right time, and when it comes I would let you know.

What is the real Eucharia like from the one on set?

It is not possible to have the same Eucharia behind the scene and on set. Eucharia on the movie set is the manifestation of the writings and the visions and the feeling of somebody else. Somebody writes a story based on the imagination of the mind and they need human beings to act it out and they decide to choose me and other colleagues to act it out.

So it has nothing to do with my prospect, I am totally an instrument used to carry out somebody’s dream or vision. So it does not in any way represent my own idea or what I stand for. So the Eucharia on screen is not the same as the one now talking to you because this is the Eucharia who is a pastor, a preacher and a businesswoman.

You once said that your intimidating profile tends to discourage men from asking your hand in marriage; what is happening to your love life?

I can’t remember ever saying such a thing. I don’t know about men being scared of me (chuckles). Well, I will take it that what you are saying is that I’m not in a relationship. Of course you know I would not want to discuss my private life. But I have to tell you what I am doing and what is not happening, I believe in things that are incubating; if it’s meant to come out, it will come out. A lot of people do not know of my commitment to my Christian life too.

How is your son doing? He must have really grown now.

Very well, we thank the God Almighty, the Lord has been faithful.

It was not a deliberate choice that I have made, it came by chance, it came by mistake. God does not kill His children who have made mistakes. He would rather sustain them and tell them that He is the owner of all things. The Lord has been sustaining me as a single parent I don’t think about it, all I know is ‘God, you are the one that created me and the child that you gave to me’. So whatever that is needed of me, it was a wrong choice that I made.

Have you tried to reconcile with the father of your son?

When somebody says that I do not want to be a responsible father what do you do? You don’t take a horse to the river and force it to drink.

Is there any plan of settling down, your ideal man?

Of course, why not? Every woman says I want tall black, handsome man. We all need good things. All the good things every normal woman wants, I want it too. He must be somebody who has the spirit of God, someone who has Christ as his backbone.

Do you see yourself quitting acting and devoting your time entirely to the ministry?