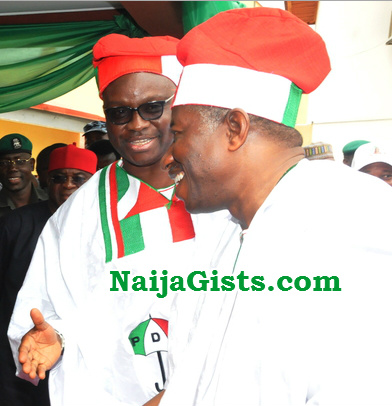 Fayose Bought N750Million Mansion In Abuja From N1.4Billion Bribe He Got From Dasuki – APC

Ekiti chapter of the APC party has released an official statement to reveal how much controversial ‘Man of the People’ Ayodele Fayose got from the $2.1billion arms fraud scandal.

According to the statement released by the APC today, Fayose allegedly bought a N750million building in Abuja from the proceeds of the fund he collected from the arms fraud.

“We are aware that Fayose at that time acquired a N750 million building in a choice area of Abuja from the proceeds of this fund.

“We are equally aware that Fayose submitted a bill of N30 billion to former President Goodluck Jonathan as the amount required to unseat former Governor Kayode Fayemi.

“A certain amount was approved for the project out of which soldiers, who were used to rig the election, were paid as well as electoral officials who released the soft copies of sensitive materials to Fayose.

“It was when a newspaper reported that N1.4billion was traced to a former minister to rig Ekiti and Osun elections, it was at the same time the said ex-minister ‘sneaked’ out of the country for ‘further education.’ Governor Fayose also travelled out about the same time.

“We are demanding that the governor should tell Ekiti people how much he received from the Armsgate money and the property he acquired with the fund.

We also call on the EFCC to beam its searchlight on Fayose to know how much is traceable to him and the governor of a neighbouring state who coordinated the disbursements of the funds.”

Chaiiiiii! Fayose don enter trouble be that ooo… What a way to start the new year.