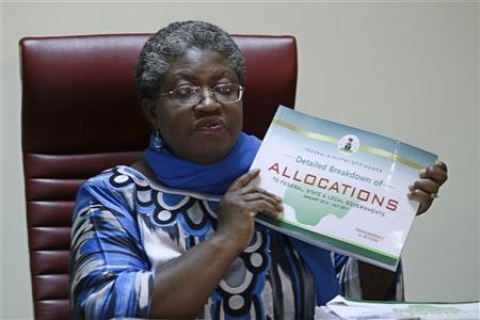 In its front page story, today May 24, 2014, ”Service Chiefs ‘Bomb’ Okonjo-Iweala”, PUNCH, in its usual tradition of lies against the Coordinating Minister of the Economy and Minister of Finance, Dr Ngozi Okonjo-Iweala, claimed that military Service Chiefs confronted her over delays in releasing the security budget.

The story, like most of the “facts” cited in the article, is a complete fabrication. There was no such meeting and we challenge PUNCH to produce evidence of such a “confrontation”.

The Federal Ministry of Finance is NOT withholding any allocations due to the military. We also challenge PUNCH to reveal the “military sources” that gave it the information.

The headline obviously is meant to knock the heads of the military establishment and that of the Federal Ministry of Finance together in order to sow confusion within the government at a time that the country needs to unite to fight a common threat.

It is instructive that no other newspaper went to town with this lie or the negative slant in PUNCH’s tasteless report.

As accurately reported by other newspapers, over N130 billion, including N85 billion in salaries, was released to the military between January and April 2014 because security is a top priority of the Jonathan administration for obvious reasons. Total defence budget is N968.127 billion which is about 20% of the Federal Budget.

We enjoin PUNCH to practice truth and integrity in its reporting. It is unseemly for a national newspaper to fabricate lies and exaggerate issues. PUNCH, Nigerians are watching you and your scurrilous sponsors.