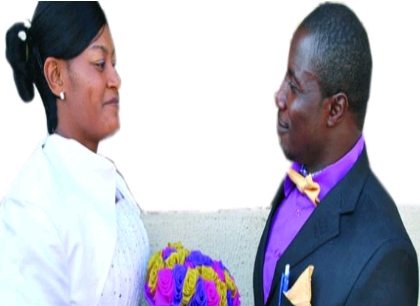 What God has joined together, let no man put asunder. Yes that’s the refrain of well wishers who thronged the wedding ceremony of the Paralympic couple, Folashade and Tolulope Owolabi, on Saturday in Jos after they tied nuptial knot in Holy wedlock at Apostolic Church. The couple were excited that the day they had been dreaming about has finally come to pass.

The athletes were overwhelmed with joy as they sang: ” This is the day the Lord has made and we will rejoice and be glad in it”. It was the day God proved Himself strong as families of the couple converged to celebrate the love that will endure for life. The couple were overwhelmed as they watched the procession in amazement. The groom, Folashade, told Daily Sunsports that she never believed the wedding day would come so fast and she’s grateful to God for the fulfilment of the dream.

The couple is already on the way to Lagos for honeymoon. It was a joy unlimited for Folashade and Tolulope as they were pronounced husband and wife. They both confessed it was the happiest day of their lives. The holy solemnization, which was witnessed by dignitaries from all walks of life was witnessed by Paralympians and especially powerlifters, who participated in the last Paralympic Games in London. They all converged in Jos to celebrate with their teammates.

Dressed in beautiful white flowing gown with white jewellery to match and Tolulope dressed in black suit with purple shirt and gold-coloured tie to matched the purple and gold colours chosen by the couple. The couple was joined in Holy matrimony by the Jos Areas Superintendent of the church, Pastor David Olayinka Abiade, after the charges had been read to the congregation and the couple, asking for any objection to pronouncing the couple husband and wife. Other highlight of the wedding was the exchange of rings after which one of the officiating pastors, Solomon Oluwole Aladeokomo, prayed for the couple. In his sermon, Pastor of the Utan Assembly,

Ezekiel Olaniyi Oladimeji, who spoke on the scriptural principles of successful marriage, advised the couple to submit themselves to the will of God and to each other. He said the bedrock of every good home is submission To the will of God and to see God in each other’s life. The cleric, who took his lesson from Ephesians 5, 21 to the end, urged the wife to submit to her husband in all ramifications and accept his leadership, while the husband should love his wife as Christ loves the church and they should their trust in God as He cares for them. Guests were treated to the music of the T.A.C choir group as the wedding certificate was being signed in turn by the couple.

The solemnization was followed by a reception at the Ezenifite Hall where the guests were entertained. At the reception, the couple with other physically-challenged persons and other guests danced to the glory of God. Speaking at the reception, the President of the Para-Olympic Committee, Mr. Monday Emoghauwe (MON), who led the delegation from Abuja, specifically thanked the parents of the couple for not giving up hope on their children despite the challenges they faced in bringing them up. While noting that if they had killed them when they became disabled or He said that if the children had been abandoned or thrown away because they were disabled to beg on the streets, there would be nothing to celebrate today.

He said despite his own disability, he had visited more than 35 countries and has been able to achieve what some able-body men had not achieved in life. (Credit: DailySun)
Continue Reading
You may also like...
Related Topics:couple, Folashade owolabi, jos, nigerian, paralympics, photos, pictures, Tolulope Owolabi, wedding