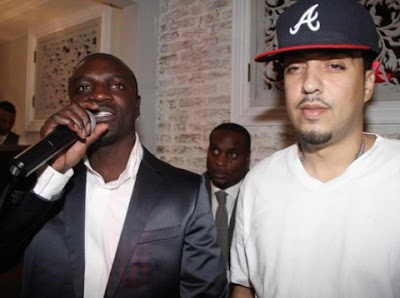 Moroccan-American hip hop recording artist Karim Kharbouch popularly called French Montana has slammed Akon, who he accused of giving him a fake wristwatch as birthday gift few years ago in a a video.

In his interview with DJ Funk Flex, French Montana who talked about signing with Akon’s label for six months 10 years ago, had this to say when DJ Flex brought up the wristwatch story.

“We can’t tell the watch story, don’t tell it now,” which forced French to weigh into it.
“Oh, Stop!” French said, as he laughed so hard.

“Shouts to Akon, he gave me a fake watch for my birthday, I’m heated,” he said, laughing again. He continued: “I’m still waiting for my other watch Akon,” French said.

“Akon I need you to fix this up,” Flex added. “Keep it a buck. Listen, we gonna go on the ‘gram, we gon’ tell fake watch busters to leave you alone, they not gonna post this up. But, we gotta clear this up.”
As French laughed, he continued with the story, “It was my birthday too,” he said.

“He was like, ‘Close your eyes, I got a present for you,’” French recalled. “Then he put a fake watch on my wrist, I’m heated.”
When Flex asked if French knew the watch was fake at the time, the rapper said: “Nah, I didn’t know it was fake,” he said.

Ungrateful friend!!. Why expose a brother in this manner-less way.