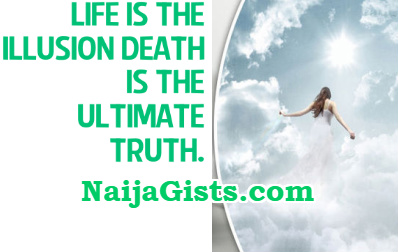 March 10, 2017  – Friday Inspiration: Life Is The Illusion, Death Is The Ultimate Truth

At the 2015 Sangam House Writers’ residency in India, during one of our routine nightly discussions, the talk veered into the subject of death and funerals. An Indian writer told of how, after an earthquake in Nepal, she witnessed the cremation of a large number of corpses.

She said watching charred bodies and cracking bones with thick smoke from the fire curling up the sky, and relatives who appeared to be Indifferent as they performed the ritual breaking of the skulls of their dead with the non-challance of playful kids, she decided ‘this must be it, the ultimate truth’.

An Australian writer asked why she thought death was the ultimate truth…and we went on to debate the issue till we all got sleepy that night.

Sometimes last year I had the opportunity to visit a morgue. We had gone to remove the remains of the younger brother of my boss. As the mortuary attendant rolled the double Mortuary door opened, I caught a glimpse of the inside, of the cabins in which bodies were piled, some more than one in one cabin, like frozen turkey.

When I drew the attention of a colleague standing close by to this, he told me the situation in this morgue was even better compared to many morgues in some government hospitals he knew of where corpses were stacked on improvised wooden platforms after embalment and bizarrely abandoned to the vagaries of the weather both day and night.

Though stunned by how we treat even our dead, I realize a lot of factors may account for this situation.

However, it was during this visit that the futility of life hit me. The words of the Indian writer re-echoed in my head: ‘the ultimate truth’.

For the Buddhist, the ultimate truth can be realized only through meditation. For the Christians, it is coming to know Jesus Christ as personal lord and saviour. For me, death and the puniness of man’s existence are both the ultimate truth.

I believe all of humanity even if unwittingly, is unanimous about this. Despite differences, creed, theology, if there is anything that all the religions known to man agree on either directly or indirectly, it is the inevitability of our own end. In fact, man is probably the only species on this planet that is aware of the inevitability of his own end.

Where should this leave us? Where does it leave us? Life is short, yes. In fact, if we realize the enormity of the time that precedes our birth, and the eons of time that will go on after we die, we will come to know how infinitesimal our place in the scheme of things is.

Astronomy gives a better picture of this reality.

For example, on a bright moonless night, if one takes a look at the sky one will see countless stars like golden dust up there.

Few of us are aware that in reality those tiny dots we see at night are all suns in their own right. Yet despite being a small star, our sun emits immense energy.

The core of the sun is a scotching 27,000,000 degree F, a whopping 93,000,000 miles from and a million times bigger than the earth. This means that if we put one million earths inside the sun, there will be room to hold them all.

The energy that leaves the sun every day, year after year, is such that, the sun gives off more energy in one second than the entire mankind has ever produced since the creation of man. In fact, because of the difficulty of quantifying the hotness of the sun based on earthly standard, some have described the sun as too hot to burn.

Yet, with all these, the sun is just another star. Our own star. Truth is, in our galaxy alone, there are over a hundred billion suns –stars- and in the universe there are over a hundred billion galaxies. To put this in context, let us assume that the earth is a spaceship -which it is actually- and we are travelling in it at a hundred times the speed of light alongside the sun, if we reach the star –sun- Arcturus which is two trillion miles away, we would realize it is one hundred times brighter and twenty times bigger than our sun.

Yet, Arcturus’ size pales in the presence of the super-giant Betelgeuse which is 600 times bigger than our sun and shines 60,000 times brighter. And Betelgeuse is in turn a dwarf star compared to several red super-giant stars in the Milky Way galaxy alone.

And the universe swarms with billion upon billion of galaxies, trillions of suns and countless number of planets. Earth is not even a typical place in comparism, yet all the evil, greed, wickedness, corruption, wars over tiny plots of land and so on, that we have ever heard about have all transpired here.

Had all things being equal, man’s portrayal of himself as something of worth, his imagined self-importance, the delusion that he has some privileged position in the universe and thus a mouth piece of some God somewhere, should have been seriously challenged if not vanquished by the knowledge of the sheer magnificence of the universe, incomprehensibility of time and space and the smallness of this tiny little creature crawling around in a tiny space all his brief life, called man.

Taking a mental note of happenings in Nigeria today, one may begin to ask how the leaders and the led, would behave if we hold these reality dearly to heart. Of course, no one is inviting anyone to adopt a complacent approach to life or live as a nihilist would, no. The question is, what sort of response should this sort of awareness evoke in or inspire in us?

Why do we, many of us, politicians especially, continue to carry on as if we own the world? Why stockpile billions of people’s money through wanton abuse of office and trust, in a world where we are nothing, where we are not promised tomorrow?

Wise men like Jesus, Buddha, Shiva and Moses, throughout the ages, have repeatedly warned and advised us to treat others as we would have them treat us. Man has gone on to build great religions based on their words, some of which our leaders profess, yet our actions runs contrary to the very ideals these men lived their lives on. And the result has been abject poverty, frustration and a total breakdown of family values in this country.

Money is just a promissory note that is as valuable as the security placed on it. Why should anyone on the basis of wanting more of it embezzle a people’s common wealth, play politics with their future and even kill?

Do we, as a nation, in the light of the issues that plagues us today, need a new approach, a kind of movement that will begin to make Nigerians, our leaders especially, see the ephemeral nature of life? Will this make them begin to see things differently, act differently and thus bring about the emergence of a new country? Don’t we already have leaders who see life as such and yet are still godless?

For me a proper response will be to be humbled and be motivated to doing good to all by it. For the Christians it is to be awe-struck by the work of God’s hands and thus fear, worship him and be kind to neighbour. I see no better motivation for goodness than this.

As for the thieving politicians who have refused to change and do the needful, who take pleasure in seeing countless children suffer at various IDP camps in Nigeria, who’d rather see money meant to pay pension of those who have slaved for years for this country put to other nefarious use that will gratify their licentious lifestyles in foreign lands, who continue to fuel all manner of conflicts in this country so as to maintain their grip on power, who continue to parade themselves as politicians and leaders while in actuality they are thieves, know this; with all the wealth you have piled up, you are smoke and will one day eventually expire.

And then while history judges you harshly here, up above, God too will not forget to…

About the author: Albert Afeso Akanbi is an author, researcher, columnist, community worker and humanitarian. He has 3 novels, contributed to two international anthologies, a number of short stories and countless articles to his credit.