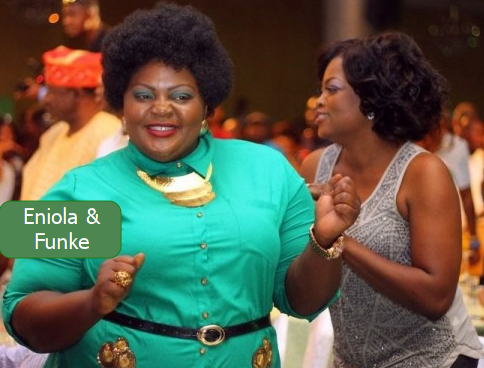 Last year, Funke Akindele and Eniola Badmus came together to prove to fans that they have settled their differences, unknown to fans, the two are still at war with each other.

According to an insider NG met at a function earlier today, Funke Akindele and Eniola Badmus just sparked another rivalry war caused by Eniola  Badmus shower of endorsement deals.

The source said Funke Akindele is always jealous of the Big and Beauty because she sees her as a threat to her success in the industry.

Recall that Funke hasn’t been enjoying endorsement deals unlike Eniola Badmus who is now a brand ambassador to over 5 major brands in Nigeria.

This and many other undisclosed issues forced the actress to distance herself from Miss Badmus who reportedly tried to send invitation letter across to her.

It is widely believed among Nollywood stars that only those who careless about Funke Akindele attended Eniola Badmus occasion over the weekend.

Another point that was raised by our source is that Funke Akindele doesn’t like attending burials.

“Burials or function the brings sorrow is like a taboo to her. “– the source concludes

Funke Akindele may have no excuse in Eniola Badmus father’s case because the man died at a good old age of 85.

What Eniola did was to celebrate his life and not sorrow over him.