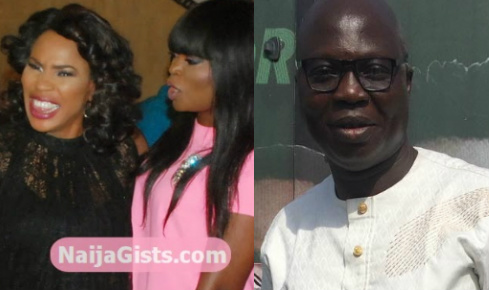 Can you tell us what’s new about Mr Latin?

Well, things are getting new day by day. I am still in the entertainment world producing my movies but most important thing that takes most of my time at the moment is this TAMPAN convention that comes up this week, and my Foundation. With Mr Latin Foundation, I have been able to empower so many people, I’ve given scholarship to several students. Just of recent, we launched a campaign for a man who needs a kidney transplant. We have been able to do a lot via the foundation and I believe this is just the way of giving back to the society. During the launching of the Foundation in 2011, City People was actively involved. You gave me the necessary media support.

What really prompted the idea of floating the foundation initially?

Well, I came from a very poor family, I have tasted poverty and I know what poverty is all about. But I believe in Nigeria, what kills us isn’t poverty but ignorance. I wanted to use my celebrity status to enlighten the society about little mistakes we make daily.

Some people may have N5000 at hand and rather than going to the hospital for treatment, they will buy drugs without knowing the cause of the sickness. They believe if two people suffer headache, the same drug that cured A will definitely work for B which is not accurate.

So, with N5000 you can go to hospital for treatment but some are ignorant. Some may want to go to Ikeja from Oshodi, rather than taking a cab; they will buy cigarette and Tomtom and begin to trek, claiming to be enjoying unknowing to him he is gradually killing himself. So, all these little and common things are ignorance not poverty. Instead of you to wake up in the morning and take a good breakfast, some prefer to take Sapele Water {Dry Gin}claiming to be taking remedy for pile.

This is ignorance and it kills. The money you’re putting on “Agbo Jedi” is enough for you take a good breakfast. So, I am trying to educate people on how to live a very healthy life.

How do you get fund to do all these?

Good! With the little I get from my acting career and of course support from very few individuals not government. About 5 days ago, I was at Ibara prison in Abeokuta to visit the inmates, and we tried to pay some light bail for some of them. On the 28 of this month, we are going back to organise a yearly competition for the inmates. Give them some food stuff and others. We just want to associate and have fun with them.

There is this believe that once a Yoruba actor rises to stardom and they start featuring in some English movies, they wouldn’t want to come back to Yoruba Movie industry…….

Let me clearly tell you that scripts request for the actor and not the other way round. If I perfectly play the role of a gateman and everyone appreciate it, for that period, I may get about 15 different scripts requesting for that same role and it may come from Enugu, Kano or anywhere in the movie industry. If I act in English movie and I did well, other producers will also come for me and I wouldn’t say I am not interested.

Looking at the Funke Akindele we are talking about, she still features in Yoruba movies, people do call her. She has told anybody that I am no longer participating in Yoruba movies. You go to where the script requests for your service. We are still very much together.

Information has it that she became more expensive after she featured in English movies and since nobody could afford her that was the reason behind her scarcity in Yoruba movies. How factual is that?

Funke is now into soaps and she believes the medium that people will accept and appreciate most is to speak English which we all do because it is universally acceptable.

I am a Nigerian from Gbongan in Osun State but I grew up in Abeokuta and that is why I always say I am from Ogun/Osun State. I came to Abeokuta in 74 and since then, I have not spent a year in another town. My wife and kids are from Abeokuta. All my endeavors are from the city.

When exactly did you start acting?

By February 2018, I will be 30 years in acting. I have never been a civil servant and I’ve never done any other job apart from acting. I was once into some professions but since I went into acting, I have always been an actor. I came from a very poor background like I told you.

My father was a hunter while my mum was a petty trader selling pap “Eko”. I attended Army Children Primary School in Abeokuta and I later went to Gbongan Community High School. Immediately after my secondary school, I ventured into sports because I love sports so much. I was brilliant but not too much. I read my books in school, I don’t know how to read at home but whenever the teacher is teaching, I will be attentive. During examinations, I flash back and remember the day the teacher taught us in class, including his cloth he wore and my parents didn’t appreciate that style.

My immediate brother who is in America now can read from morning till night but he never understood the book more than I did . He is older than me, my parents loved him so much because he reads but they don’t like me because I don’t read. After secondary school, they had meeting with us, saying, they had no capacity of sending the 2 of us to the university, so, we should both agree on whom to be sent to the University. I immediately replied that they were referring to me, so I volunteered myself to stay while he continues.

Then, I went to learning Electrical Electronics. It was in the process of learning that profession that I joined acting. I was learning and at the same time doing my sport because I stayed with my brother who is a soldier. Now that I realized that education is superb and the best, I have had to go back to school with my old age. There is no way, if you are not educated, just forget it. I am currently in 200 level at the National Open University of Nigeria {NOUN}studying Business and Conflict Resolution Studies.

Which aspect of sports did you practice?

I did virtually all sports but boxing was number one. I fought one day {Laughing…..}in 1987, my team went for a competition and when they returned, we had to fight them like an exhibition fight to welcome them back, we were fighting and the jubilation was much. This particular man is now a police officer in Abeokuta now, he gave me two straight punches and the event ended. Believe me; I didn’t recognize the people around me again. I lost my memory. Five minutes after, coach left and I used to be very close to him because he is my brother’s friend, do I was the one assigned to take his gloves to his house which unconsciously I did.

I took it to his office which was like one kilo meter to where we were. I didn’t know when I took it there, I went back to my shop and I sat. A man who gave me job came to pick his property, he is a footballer and we all moved around as sports persons. He requested for his electric fan and I was suspiciously looking at him, I was saying it in my mind that I have seen him before. I told him sorry, it seems we’ve met before, he thought I was joking, he said please give me my fan. Then, I gained my memory back and I remembered the gloves. Quickly I rushed to the field again and when I got there, I couldn’t find the gloves and I started weeping because it was too expensive just like the punching bag. I went to tell the coach and on getting there, the gloves were already hang at it’s position, then I remembered I came here the other time. My coach called me and said that same thing has happened to him several times, that was why I left boxing. By the time got back to my shop, I remembered everything that happened.

How did you get the name Mr Latin?

I started acting not as a comedian; I did a lot of stage plays and others. Olaiya Igwe is someone whom God sent to me. Segun Adeniji discovered me as a comedian. My former Landlord behaved like the way I am now acting. When I get to location, I will give the account of my landlord’s behavior and everyone will be laughing because he has a funny character. Whenever he is fighting his wife, he will be checking time, and after sometime, he will tell his wife to rest because even the wrestlers do have a break after fighting.

After minutes, he will call his wife for them to resume the fight. And it was a serious fight. The man died about 4 years ago. This man did a party, he killed a cow and he invited just 4 people. When he was asked, he said it was because he doesn’t have friends.

His neighbors requested for food, he said he did the party not because of them. He has a generator and he switched it on just 4 times in a year. Ileya, Itunu Awe, Christmas and New Year. They asked him why he didn’t allow his wife to Mecca, he said they will kill her before she returns. How? He said men are so dangerous to trust, they will sleep with her go to Mecca. His character influenced my comedy style in 1990.

I have done a couple of movies with Olaiya Igwe that are not comedy. I started comedy in 1990 with Towodun produced by late Baba Ogungbe. Segun Ogungbe’s dad named me Mr Latin. Baba Sala, Baba Suwe, Aluwe and co were the rave of the moment when I started comedy and I wanted to be different, I started speaking Latin English to represent retirees like Railway workers and others.

Godogbo and Ajirebi were doing “Yoruba soro, O powe”. I wanted to be different and unique; I started quoting Latin by saying according to Latin even though they were not correct. Since people don’t know the meaning, I will interpret it to favour the script we are doing. So, after that, he wanted to send me on an errand, he didn’t know my name and he said “this boy, baba Latin”, hey the Latin man and that was how everyone started calling me Mr or Baba Latin.

But who really brought you into acting?

The friend who brought me into it is not even an actor. I learnt the Electric Electronics and I do make people laugh with my hilarious statements, that was how he informed me that there is a rehearsal going on in their compound and if I could go. I told him I am not interested in acting, football is what I appreciate most, because after I stopped boxing, I delved into football. I was forced to attend the rehearsal and when I got there, they accepted me and we are still together till date.

At what point did you leave the Electric Electronics you were into?

I wasn’t the one who left it, the job did. When there was no time for me to pay attention to it and all my customers had gone.