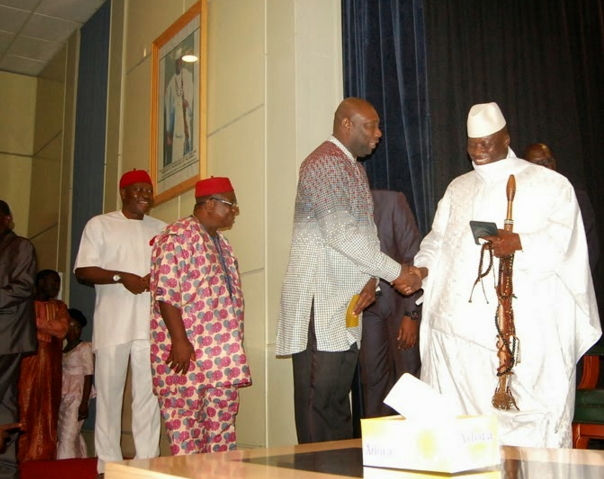 Asiegbu, in a lenghty statement made available to TheNews, described Bubaccar as being “petty and myopic” in reaction to the latter’s attack on Nigerian and Ghanaian actors telling them to “stop scavenging on Gambian meagre resources”.

“While Bubaccar’s infantile and attention seeking rage only succeeded in putting him in a bad light, he needs to be reminded that Nollywood practitioners have been involved in collaborative initiatives with the good people of The Gambia, geared towards growing the Gambian movie industry inspired by Nigerians and Gambian citizens,” he said.

According to him, the collaborations between the two countries began as far back as 2007, a move encouraged by President Yahya Jammeh. Some of the initiatives led to capacity workshops undertaken by Nollywood actor Francis Duru and other notable practitioners on pro-bono basis out of the interest, zeal and passion of the Gambians towards Nollywood and the Nigerian people.

“How did an invitation extended by President Jammeh to Nollywood to collaborate and share ideas translate to scavenging and hustling?” Asiegbu queried.
Bubaccar, in an article titled “Nollywood Actors, Others Must Stop Scavenging On Our Meagre Gambian Resources” published on various online platforms last week, described Nigerian and Ghanaian actors as “scavengers and hustlers”.

Bubaccar’s attack was believed to have been stoked by the recent news that Gambian President Jammeh has presented to 15 Nigerian and Ghanaian movie stars pieces of land in The Gambia. However, Bubaccar, who felt sidelined by his President despite having been in the filmmaking business for over two decades, was not happy that outsiders are being rewarded while he and his compatriots in the industry seemed to have been sidelined.

Asiegbu explained that President Jammeh’s gesture was a move to open up his country’s emerging film and video culture not only to Africa but the world in general.
The gift, he noted, was to encourage the beneficiaries and in appreciation of President Jammeh’s request for them to come up with collaborative initiatives to help build The Gambian movie industry and satisfy the hunger and interest of the people of The Gambia.

He said it is on record that President Jammeh has appointed ministers to midwife the collaborative projects which are already on course. And each time Nollywood actors went to the Gambia as a group, it has always been at the invitation of President Jammeh.

The former AGN president said Bubaccar’s action is simply borne out of frustrations and his attack smacked of xenophobic tendency that should be tamed at its infancy.
“Prince Bubaccar’s piece clearly shows a man pained that his President had not satisfied his selfish desires which he had tried albeit unsuccessfully, to hide…If a dangerous character like Bubaccar ever becomes

President of The Gambia, one does not need a soothsayer to know that he will place an iron curtain over the country and bar foreigners from investing and or doing business in his country thereby causing his people pain and suffering,” Asiegbu declared.

He added that if Bubaccar is not displaying crass ignorance, he should know that there are over 30,000 Nigerians doing business in The Gambia because of the enabling environment provided by the president. And it is also on record that the Nigerian/Gambian relationship extends to judiciary and education.
“Will Bubaccar in his fleeting infantile state of mind also call these hard working private businessmen ‘hustlers’ and ‘scavengers’? Zenith Bank, GTB, Access Bank, Finbank and First Bank, all Nigerian banks, have a robust business operation in the Gambia. Are they scavenging and hustling in Gambia too?” he queried.

Asiegbu said Nollywood will forever remain grateful for the value President Jammeh has placed on the industry and for his magnanimity towards his colleagues especially the choice pieces of land.

“So, we are not threatened by Prince Babuccar’s infantile threats. The relationship between the good people of The Gambia and the Nigerian people is one which has come to stay and the likes of Bubaccar cannot break it out of sheer hate for his country’s president,” Asiegbu summed.

[Reported By The News]