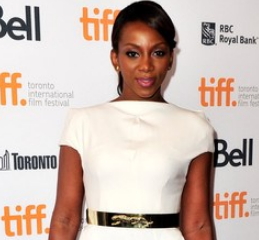 Her mission in Canada is to attend the premiere of Half of a Yellow Sun, A Nigerian movie based on Chimamanda Ngozi Adichie’s novel.

Genny with gospel star Onyeka Onwenu and other Nollywood stars stormed the red carpet of Toronto International Film Festival on Sunday Sept 8, 2013 at the Elgin & Winter Garden Theatre in Toronto.