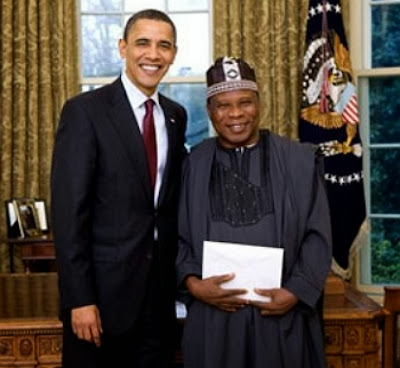 Sept 25, 2013 – “God Is A Nigerian” – Prof. Ade Adefuye, Nigerian Ambassador To The United States Of America

The Nigerian ambassador to the United States, Prof. Ade Adefuye has said that God is a Nigerian. He made the declaration yesterday at the Christian Association of Nigerian-Americans’(CANAN) first Charity Gala and Top Ten Awards Dinner. He said that it was divine power that made it possible for Nigeria to survive the obstacles it has encountered. He gave an example of the succession crisis that followed the death of former President Umaru Yar’adua. He said that at the point when some people were throwing around the “doctrine of necessity,” there was a real chance of a coup that would have torpedoed Nigeria’s democracy.

“Just when we are at the precipice, something happens and we are back on the road,” he said. The former professor of history told the audience that he shared their “horror, disdain, and contempt” for Boko Haram and its associates. He said the Nigerian government in partnership with friends in the US would soon unleash development programs in the North that would provide gainful employment to youths.

Ambassador Adefuye, who was one of the recipients of the Top Ten Nigerians in America award, charged the audience of church leaders, business people and professionals to care for their neighbors. He said it was our lack of care about the underdevelopment and lack of opportunities in some parts of the country that led to Boko Haram insurgence.” The chicken has come home to roost,” he said.

“If your neighbor is eating cockroach and you do not care,” the ambassador warned, “at night, when his stomach is grouching, he won’t let you sleep.”

Other recipients of the awards are US Congress man, Peter King of New York, the First Nigerian-born California Superior Judge, Bunmi Awoniyi, the only African to have served on a NASA board, Dr. Augustine Esogbue and the first black to make 3.98 GPA at John Hopkins University. Others are former UN Under-Secretary, Ibrahim Gambari, a leader of the Black Cardiologists in America Dr. Ola Akinboboye, the Founder of Nigeria’s first licensed private refinery, Usua H. Amanam and scholar, Prof Toyin Falola. The Gala night was aimed at raising money to continue CANAN’s support for victims of Boko Haram violence in Nigeria.

The keynote speaker, Prof. Babatunde Osotimehin who is the executive director of the United Nations Population Fund urged the audience to expand the discussion. “We must attack Boko Haram from the source,” he said.

While giving the vote of thanks, former Minister of Education Mrs. Oby Ezekwesili chided the participants for being rowdy as award recipients were being honored. “To build a new society, it has to start in the church,” she said. “The church is beginning to look like the society we are criticizing.”

Continue Reading
You may also like...
Related Topics:God is a Nigerian, nigerian ambassador to the united states, professor ade adefuye