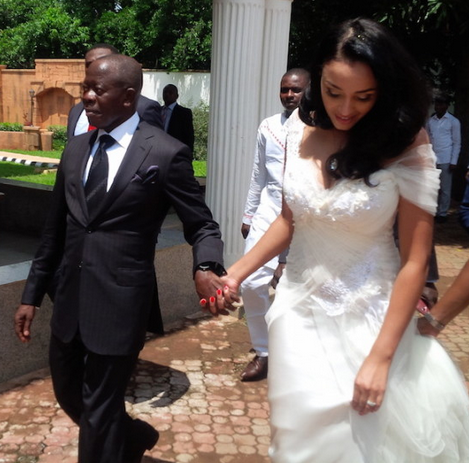 May 16, 2015 – Governor Adams Oshiomhole: My Wife Iara Fortes Is Peaceful With My Children, She Has Agreed To Mother Them

Hear what Adams Oshiomhole said about his new wife, Iara Fortes during their wedding reception yesterday in Auchi Edo State;

“I have seen a lot of publications, some saying that she is Philippine, Dutch and several others, but she is from Cape Verde. And that is part of West Africa. And I hope that will rest the debate of where she is from,” he said regarding her nationality.

“She is very humble, she appreciates the nature of my job and life that it is one that one comes back home late. Sometimes 3: 00 a.m., she understands my weaknesses, she is more or less the mother of the house, the one that has accepted to be the mother of my children.

“I am happy that all my children are at home with ‎her and accept her as their mother even though she is not old enough to be their mother. She has accepted to fill that gap,”.

36-year-old Iara Fortes, a flight attendant quit her job last year after an encounter with the governor on an Emirates Airlines flight.