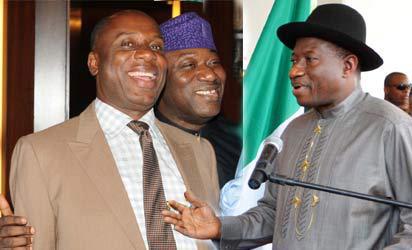 Have you been watching Rivers state governor Rotimi Amaechi? What do you think of this man? Honestly? I am simply blown. I have no idea what he is looking for. We all know APC are not the type to give him the presidency spot. Nigeria and APC are too backwards and bogged down in dumb sentiments to make such sensible choices. So what is Amaechi really after that makes him the most standup, revolutionary, daring and truth speaking Nigerian public figure today? The Jonathanians created a fake faceBook page in which they pretended he wanted the APC chairmanship slot. That didn’t even fool 3 year-olds. So what is Amaechi after? Why is he so true to the cause and unrelenting at it?

ENDS gave governor Amaechi the ‘Nigerian Revolutionary,’ award for 2013 in recognition of his outstanding revolutionary spirit. Have you rebelled? Rebelling is not limited to masses, it is simply a strong statement and defiance of the authorities that be, made in their faces, damning the odds. Governor Rotimi Amaechi rebelled before there was the need to. Remember, before there was anything like APC – the formidable opposition – Governor Amaechi had already gone rouge against the despotic Abuja regime. He had gone at ends with the president and his wife, before he even ever had a broad base. This is a man from the same neck of the woods, who had every reason we more worthless Nigerians usually have to support ‘our own,’ because they are from our same locality and of course, because they are rich/in power. Before APC, governor Amaechi organized, worked with diverse governors and whopped the President’s behind, winning the chairmanship of the governors’ forum. Remember the 16>19 saga.

Perhaps governor Amaechi is so determined to help Nigeria get rid of this leadership because he really knows him. He knows if and how the first family really attended school, obtained (or didn’t) their degrees. He knows the rituals, the robberies, the adoptions, the sacrifices, the abominations. Perhaps he knows the real secrets and as such knows he has to carry the mantle to save Nigeria from its painfully deadly predicament. Perhaps this is why Abuja cannot stand him – because they know he knows.

It was governor Amaechi that told us that we are fools – and it is because we see them stealing and do not stone them. Straight and blunt words; no spices, no bandages. He told us to our fasces, that if it was anywhere else in the world, people will have been on the streets. He said, ‘yes, stone me too.’ This is a real human being and an honest man. He is ready to die for our cause. He is ready for us to stone him too if that will make us stone the rapacious monsters in Abuja. He has stoned them, no one can deny this. He has thrown rocks at them. But have we? Have we acted in any way in our capacity that equals Amaechi’s actions in his? If we were him, will we have pandered to the authorities that throw the dice, or will we have dared to rebel and revolt as he continually does, being locked out of his government house, being harassed at every turn, yet staying steady in his mission to rescue Nigeria?

Governor Amaechi relates with his people and with the East, West and North. He is a friend to all and has a distinction in correspondence and active political strategization. It is no secret that he flew to Kano to influence the selection of the nation’s second highest Muslim leader, the new Emir of Kano. This dynamic man just does not give up and has no boundaries or limitations. When Abuja blocked them leaving Kano that night, potentially putting their lives in danger, we heard Amaechi personally took the steering wheel of the car and drove himself and other politicians with him to Abuja in the dead of the night. Now, is that not a man?

In the news today, he is at it again and Abuja just cannot stand it. He was there on the road, as usual, out of his car, personally challenging the soldiers from the Presidency who wished to deny him his legal right to travel to Ekiti to ensure there is no accident and the people there do not waste a single vote for a registered thief. Abuja just could not let him go. They blocked and arrested him. This is how afraid of him they are. This is how much they are ready to risk his life – by harassing him on the dangerous roads of Nigeria, putting him at risk of the deadly menaces that plague our nation under their government. Yes, that brings us to an important topic – terror. If Amaechi was the president of Nigeria, Boko Haram insurgency would have long been a thing of the past, for history books. That is a fact. There can never be any such insurgency under Amaechi’s watch. He is a no nonsense man. He extends the olive branch that has poisonous spikes on it. And we have absolutely no issues with that. Go on, Amechi; Nigeria has no room for terrorists to be paid from our nation’s wallet, nor even space for them in our jails. Amaechi would have decimated Boko Haram just like Yar’Adua did – killed them all. No kid-gloves, romancing and arming the terrorists as the current wicked leadership does.

I will go for Amaechi for president any day. I will even go for a combination of Amaechi and Oby Ezekwesili for President and Vice. They have walked the walk, talked the talk and fought the fight. I don’t care what region they are from. If I need a spiritual leader, I’ll get that in my place of worship. If I need a tribal leader, I will get that in my village. For my president, I will choose a strong man or woman who is dynamic, strong, composed, charismatic and above all, has some brains in his head. An Amaechi presidency will bring back sense to Nigeria and will force our neighbors and even the colonial master to respect and fear us. Yes, like Putin. And like Putin, his people will love him and vote and re-vote for him, term after term after term.

Dr. Peregrino Brimah [Every Nigerian Do Something] Email: drbrimah@ends.ng