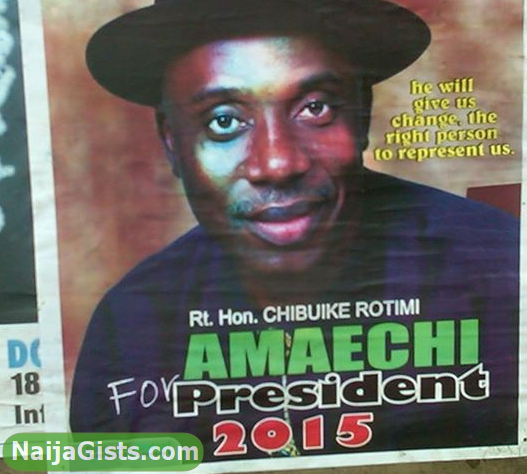 Popular anti-Jonathan Governor Rotimi Amaechi might have kicked off his campaign for the upcoming 2015 Presidential election in Nigeria.

The Governor of Rivers States reportedly started an aggressive campaign in Abuja and strategic places all over Nigeria in order to compete against the current president last week but the story is far from the truth.

Amaechi has denied the posters through his Chief of Staff, Tony Okocha.

Governor Rotimi Amaechi said the opposition camp are behind the viral election posters.

The governor spoke on the telephone yesterday through the Chief of Staff, Government House, Port Harcourt, Chief Tony Okocha.

Okocha said: “We thought the initial kite they were flying was that Governor Amaechi wanted to be Vice President in 2015. Now that his presidential campaign posters are in Rivers State; that means he is eminently qualified to be Nigeria’s President.

“There are mischief makers in the system who are scared of competition. They are definitely behind the Rivers Governor’s 2015 presidential campaign posters. Their stock-in-trade is to do mischief. Rivers people know those behind the posters. I will not mention their names.”

Several areas in Port Harcourt and some other parts of Rivers States have seen floods of Amaechi’s presidential campaign poster but he has denied ever running for office.