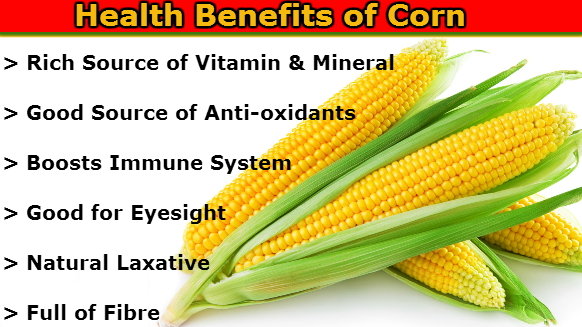 Eating whole grain corn everyday may have a lot of health benefits:

Macular degeneration and cataracts are among the world’s most common visual impairments and major causes of blindness. Infections and old age are among the main causes of these diseases, but nutrition may also play a significant role.

Dietary intake of antioxidants, most notably carotenoids, such as zeaxanthin and lutein, may have considerable benefits for eye health. Lutein and zeaxanthin are the predominant carotenoids in corn, accounting for approximately 70 per cent of the total carotenoid content. However, their levels are generally low in white corn.

Commonly known as macular pigments, lutein and zeaxanthin are found in the human retina, the light-sensitive inner surface of the eye, where they protect against oxidative damage caused by blue light. High levels of these carotenoids in the blood are strongly linked with reduced risk of both macular degeneration and cataracts.

Observational studies have also shown that high dietary intake of lutein and zeaxanthin may be protective, but not all studies support this.

One study in 356 middle-aged and elderly people found a 43 percent reduction in the risk of macular degeneration among those with the highest intake of carotenoids, especially lutein and zeaxanthin, compared to those with the lowest intake.

Taken together, regular consumption of foods rich in lutein and zeaxanthin, such as yellow corn, may have beneficial effects on eye health.

Bottom Line: Being a good source of lutein and zeaxanthin, corn may contribute to the maintenance of eye health.

Diverticular disease (diverticulosis) is a condition characterised with pouches in the walls of the colon. The main symptoms are cramps, flatulence, bloating, and less often, bleeding and infection.

Despite lack of evidence, avoiding popcorn and other high-fiber foods, such as nuts and seeds, has been recommended as a preventive strategy against diverticular disease. However, one observational study, which followed 47,228 men for 18 years, does not support this recommendation.

In fact, popcorn consumption was found to be protective. Men who ate the most popcorn were 28 percent less likely to develop diverticular disease than those with the lowest intake.

Bottom Line: Corn does not promote diverticular disease, as previously thought. On the contrary, it seems to be protective.

The fat content of corn ranges from five to six percent, making it a low-fat food. However, corn germ, an abundant side-product of corn milling, is rich in fat and used to make corn oil, commonly used for cooking.