August 10, 2015 – How Ooni Of Ife, Sijuwade’s Spirit Woke Me Up In Nigeria On The Day He Died In London – Prophet Kasali

The late Ooni of Ife, Oba Okunade Sijuwade, who died last week, had a premonition of his death.

He told a Christian minister recently that God had told him the date of his death and that he would not be physically present when one of his children would be getting married this month of August, urging the man of God to ensure he was present at the marriage ceremony to give spiritual guidance to his children.

Few months ago, Oba Sijuade also visited the Hour of Mercy Prayer Ministry, at Ojedeji Two, Moniya near Ibadan, to surrender his life to Jesus Christ and became a born again Christian. 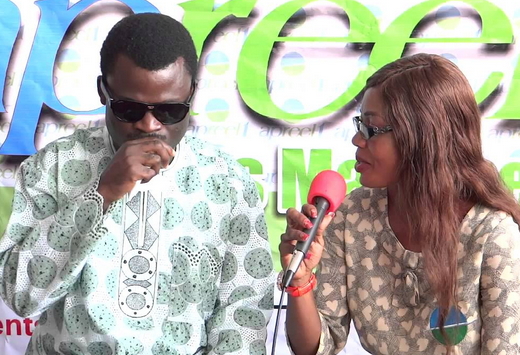 These claims were revealed by the General Overseer of the Church, Prophet Muhideen Kasali, while ministering during the August monthly Night service, held at Ori-Oke Alaseyori, Moniya, at the weekend.

Kasali, who is blind, had earlier sang glowingly for over two hours in honour of the late Oba, recalling how Oba Sijuwade stormed the Church mountain and said he had come for the salvation of his soul, asking that the prophet pray for him.

Said Prophet Kasali: “His royal father the late Oba, with all his wealth and majesty, came to this mountain of Mercy to surrender his life to Jesus Christ for the salvation of his life.” Oba Sijuwade said he was doing so because God had revealed to him that he (Muhideen Kasali) is a true prophet of God. Prophet Kasali said afterwards that he prayed for the Ooni and God received him and handed a certificate to heaven to him and the angels were happy for his redemption.

Prophet Kasali who was addressing over ten thousand faithful on that night, explained that few weeks ago, late Oba Sijuwade called him into his palace at Ile-Ife, Osun State, and said God had revealed to him the date of his death.

Therefore, he (Prophet Kasali), should ‘spiritually search’ his palace and residence to discover whether there was anything unholy or ungodly there. “After I was conducted round, I told him everywhere was in order spiritually.

“Late Ooni told me that he was embarking on a journey very soon and I should take care of his family. At this point, I asked him about the marriage of his son coming up this month of August. He answered that he won’t be around to witness the marriage ceremony.

“On the day the late Ooni died, his spirit came to my residence at the Mount of Mercy, Moniya, at exactly 5:00 am and knocked my door. I woke my assistant, Bidemi, up after opening the door to ask if there was anybody asking for me. He said it was 5.00 am and nobody was looking for me. I asked spiritually and discovered it was the late Ooni that knocked the door to say goodbye.”