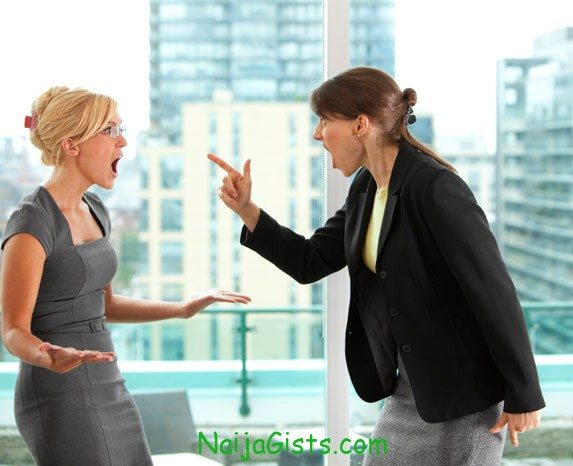 My friends, have you ever done something then afterwards you sit down and wonder ‘why did I react like that, was it necessary?’

Should you find yourself in this kind of situation at all time, this dandy article might just be what you want.

Few weeks ago, a good friend of mine was asked to preach at our church. Although he claimed he wasn’t prepared to preach, he gave one of the best and most enlightening messages I have ever heard. He didn’t preach about the conventional ’10 keys to prosperity’ or ‘Your Miracle is yours if you sow a seed’. No, none of that, he preached a simple topic, ‘Stop, think’. He didn’t quote the bible from cover to cover but the message got me thinking. Half the time, the way we react to some things is because we didn’t stop to think.

“Mr A, is an A- Lister in the entertainment industry. He is married and has three kids. He went to the Alphabets Movie Awards without his wife. On his way in, he sees Miss B, a single, pretty actress, he greets her and they start chatting and they eventually walk into the place together, all smiling and happy.

He wakes up the next morning and finds out that a picture of him and Miss B is the front cover of Na So So Gist Magazine and inside they write that he and Miss B may be having a secret affair. This article was written by Reporter C, one of those reporters from my article, ‘wealth’ . Mr A is furious, his wife is asking him questions, his kids are eventually going to hear this story, his name has been tarnished, so Mr A decides that he would have the reporter that wrote the story arrested.

He calls the IG (of course he has his number as he’s well connected) and he orders for the arrest of Reporter C.

Reporter C is arrested and because of this arrest, his wife that was in the hospital waiting for him to bring the money to finish paying for her treatment dies. His kids are moved out of their house by his wicked landlord and his world has practically crumbled.

Now… Many people don’t care about what has happened to Reporter C. As far as some people are concerned, he deserves it because he wrote false stories about Mr A, but how many of us would admit that Mr A’s actions were a bit over board for what was written about him. His wife didn’t threaten to leave him , she just asked questions. Yes, his kids will see such horrible false stories but I believe it’s their duty to stand up for their father because they know who he is. Mr A really didn’t have to order for the arrest of Reporter C.

If he felt that talking to his family and assuring them that it’s not true isn’t enough (which really should be) he should simply have got the contacts of Reporter C and explained and told him off if necessary. He did what he did because he didn’t Stop toThink.

A lot of us are troubled daily by what people are saying about us and we allow their words and actions determine the nature of our response to them. By default, man is very territorial and we will do anything to establish supremacy over any situation and circumstance; so if someone steps on your toes you are quick to make trouble.

If a guy drives terribly on the road, we rain insults on him non-stop. If we hear that someone has said something bad or nasty about us, we quickly want to lash out and defend ourselves. We also, instinctively, want to deal with the person spreading the “rumour”. We are quick to send out text messages, emails, bb messages, twitter, Facebook, etc to “blast” the people involved in the spreading of the rumour.

As you try to compose words of defence, explanations and justifications of your actions, pause to THINK and ask these few questions. Is the conversation I am about to engage in:

T- True? What facts are actually on the table?

Honourable? What am I revealing about my own integrity by how I respond?

I-Important? Is it important enough for me to validate by responding?

N-Necessary? Can any good come out of pursuing this conversation or is it idle talk?

K-Kind? Can I be careful not to throw unnecessary stones at someone else?

GOD’S OPINION IS WHAT MATTERS MOST

The fact that stands is that people will talk about you, regardless. I want you to understand that it is not what people say about you that matters, it is what God says about you.

1. People may have said you are a liar but what does God say and what do you say?.

2. Even the thief that was by Jesus’ side on the cross was delivered and he made it to heaven so who has the right to condemn you?

3. I don’t care if your father was the strongest native doctor in the village, let them talk. As long as you are on God’s side…no shaking. Let the entire village stand against you…no problem.

4. So you are 45 years old and you’re not married as a woman and they are talking behind you that it’s because you have wasted your youth. Don’t answer them. If God could give Sarah a baby at age 90 then do not respond to them, let them talk.

5. Ok, so you are still jobless after five years of graduation and you are too ashamed to travel back home because they have been laughing at you. Hold on, my brother because your change is coming. Let them talk because the stone that the builder once rejected will become the chief corner stone.

6. People have been laughing at you at your place of work that you will never be promoted because you are playing holy, holy and you no dey give egunje. Let them talk. After Efcc has taken them away, you will be placed far above them.

7. Mama, people may look at you and say that the church is small and sometimes you want to get offended and tell them how God is moving here. No need to react. With their eyes they shall behold the manifestations of God’s glory in this tabernacle.

8. If you are here feeling that people are mocking you and your relevance. The scheme of things is gradually fading away. They may even come to you and spite you with it…Do not mind them!

People “will” go behind your back and say stuff but na dem Sabi!! “If nobody talks about you, then you are nobody, wether na true dem talk or na lie, my guy no worry. Stop Existing, Start Living, 2Face and MI said it.

If you must chop, then dey must talk! The big deal is how you react to what they must have said. Your reaction either gives their allegations potency or you just totally ignore them.

So, before you jump on your phone and send that nasty text message, before you send out the email in your defence, before you make that phone call to “blast” your accusers…STOP! THINK!

As I write this to you I am also talking to myself because I am also guilty of the same thing. In the past, I would react to negativity in a way which is also negative. So, if someone wrongs or insults you and you do the same thing, you are both actually the same.

If you stop for a few minutes and think of the impact your hasty decisions, words or actions might have, it will help you to control things better.

A friend of mine is in a wheel chair today because of a fight he had with a bus driver who hit his brand new land cruiser. The bus driver came down and instead of begging my friend, started to insult him. My friend being a hot tempered man slapped him and, of course, the bus driver took a stick and broke his legs. Police came and even though the bus driver was arrested and sent to jail for ONLY six months, my friend will spend the rest of his life in a wheelchair or get artificial legs.

This is a very hard thing to do, even for me, but I believe that practice makes perfect and God will help us all.(Stella Damasus)

“Don’t let your anger get the best of you, it may just bring out the worst in you”

8 thoughts on “How To Control Anger: Stop To Think, Be Patient”