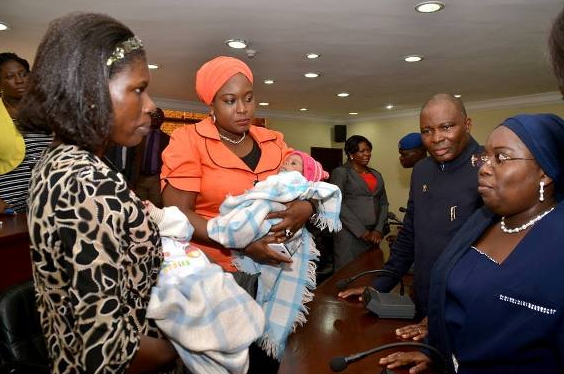 July 8, 2015 – Igbo Leader Thanks Lagos For Approving Welfare Payment For Ruth Uche & Her Children As Neighbours Recount Her Plight

It was a long wait yesterday at the Agege, Lagos home of the Uches who hit the limelight last week with the story of their three sets of twins.

Family, friends and neighbour gathered at the modest resident at 32, Awori/Morcas Street, Agege, waiting for top government officials who were expected on a visit.

Ever since the news of Mrs Ruth Uche, the woman whose husband disappeared on learning that they were expecting another set of twins broke, the home has become a Mecca of sorts.

As at 11am yesterday when officials of the Lagos State Government visited the area to take Mrs Uche and her children to the Secretariat at Alausa on the directive of the Deputy Governor, Dr Oluranti Adebule, some of her neighbours at the scene could not just hide their feelings on her situation which they described as “critical” and “unfortunate”.

A neighbour, Mr Umaru Aliyu, told our reporter that he could not understand why her husband fled home, considering that she is a peaceful woman who has lived in this face-me-I-face-you compound in the last two years without having any rancor with anyone.

“We all live here and saw the suffering that this woman and her children have been going through. Even when their father was around things were difficult for the family but the situation grew worst when the man left home,” he said.

Aliyu said the family could barely afford to feed, adding that the goodwill of neighbours was what they depended before now.

“But for how long will she and the children continue to depend on people to give them food to eat? She needs help in the area of food and also in caring for the children,”a concerned Aliyu stressed.

Also, Mrs Sadiat Okunola, a food stuff seller in the building said: “I do give them food stuff, because I know the challenges they have been through. It has not been easy coping with six children without any help from anyone”.

Mrs. Uche who said she will not hesitate to accept the husband if he returns home considering what she has gone through, said all was well with them but taken aback that the man who paid her dowry and married her according to her traditional rites could flee home in that manner.

She told our reporter that as a wife she has done everything to support her husband and keep the family going.

“Am very concerned about my family that is why I work hard, am in this situation today not because am lazy but because the burden is just too much for only me to handle”.

“I use to work as a messenger in Mid Atlantic Energy, but decided to quit the job and take a up a teaching appointment in the school that my children attend, that way I can be closer home and help take proper care of the children.

“The school fee for the school was N10, 000 per term for each child, but because I work there the management collects N5, 000 from each of my children, this they remove directly from my salary while the remaining N10, 000 is expended on the children educational material.”

She said the family survived on the six thousand naira she makes from the six children that she organised extra lesson for after school hours.

“That is how we have been coping since my husband left, we drink garri both in the morning and night and it has not been easy”.

She said the only help she got from a family member was from a co wife in the family who came around once to cook for her after she put to bed and was discharged from hospital.

Moved by her story, the Lagos Deputy Governor presented a cheque to the mother of six, saying that the assistance would help rehabilitate her and family.

She said the development was one of the campaign promises of the State Governor, Mr. Akinwunmi Ambode, that the government will be compassionate to address the needs of the people.

She directed the Ministry of Women Affairs and Poverty Alleviation (WAPA) to open a functional account for her where the money will be paid in, while directing government officials to take assessment of her situation so as to further address her case.

She sympathised with her over the traumatic experience she has faced in trying to raise the six children assuring that the government is ready to come to her aid and ensure the well-being of her children.

“As a woman and a mother, I can only imagine what you have gone through managing six children, it must have been energy sapping and depressing, but I salute your courage and I want to assure you that this government will not abandon you, we will stand by you and ensure that you are assisted to get back to normal life”, Adebule assured.

She thanked the woman for coming forward to seek help rather than abandon the children, which some other persons would have done, noting that if she dumped the children by the road side, it would still have been the lot of government to take custody of the children and ensure their well-being but her presence and determination to raise her children further encouraged the government to offer the necessary assistance.

The Deputy Governor added that the Governor had approved the release of some amount of money, which the deputy governor stated will be paid into an account and part of it will be used to attend to some of the immediate needs of the children and their mother, adding that officials from the Ministry of WAPA have been directed to provide the necessary logistics support to her.

Adebule however advised the run-away husband to come forward and take up the responsibility of caring for his family, admonishing him to be appreciative of the divine blessings that have come his way through the children.

President-General Igbo Progressive Leaders’ Council, Eze Uche Dimgba, described the gesture as a confirmation of Governor Ambode’s promise not to marginalise any group in Lagos.

“We appreciate the taking over the responsibility of an Igbo woman,”Dimgba, who is the Eze Ndigbo of Ikeja said.

In her reaction to the government’s gesture, Mrs Uche thanked the State Government for assisting and supporting her, noting that the love shown to her and her children could only have come from a government that truly cares about the well being of its people.

[By Miriam Ekene-Okoro, The Nation]