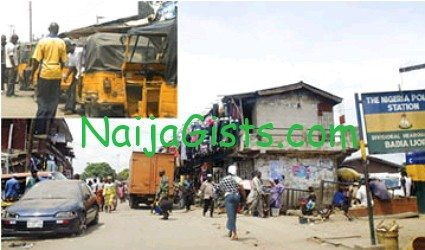 The enclave of Ijora Badia in Apapa-Iganmu Local Council Development Area (LCDA) of Lagos State is a constellation of absurdity. It is indeed a melange of miscreants, roughnecks, gangsters, fraudsters and prostitutes. It is an enclave situated along the railway line that runs from Ijora to Iddo.

The environment is filthy with euglena infested brackish lagoon, which harbours dangerous reptiles and breeds mosquitoes in millions. From Ijora bus-stop, a macadamized road that links the bus-stop with Ijora Badia railway line community gives a wrong impression of where it leads to.

On both sides of the link road are shops that display different wares ranging from electronic equipment to clothes, shoes, bags, among other articles of trade. But the end of the link road exposes one to the railway line habitat, which bubbles with a plethora of indecent and unspeakable activities.

By the swampy side of the railway are clusters of large wooden cabin suspended up to six feet atop the brackish lagoon. There are several of such accommodation housing half-dressed, haggard, disheveled, fierce-looking women of all sizes, shapes and ages. In fact, one could rightly say the cabins are brothels on the lagoon.

By 12 noon when this reporter visited the enclave, some of the women, especially the older ones appear worn-out with bulging, sleepy, red eyes, an indication that they must have had a busy night, perhaps also, it’s an indication that business is booming.

Even as they intermittently shut their eyes and nod their heads involuntarily as they fight against the sleep trying to envelope them, reliable sources swore they were still ‘ready for action if a customer calls’. For the younger women, most of whom appeared tattered and unkempt, they sat in clusters with their navels on display, as well as their breasts shooting out like balloons.

Although, the sight of those riotous stretch-marked breasts may appear repulsive to any reasonable man, the male folks in the community, who appeared morally depraved and seemed no less better, found such commodity very luscious, salacious and sexually arousing. They also wore skimpy tight skirts and shorts that exposed their thighs up to their pubic region, but like the breasts, such exposures were also very repugnant. This is because instead of robust and succulent thighs that would spark a riotous blood through the sexual veins of any healthy man, who would be anxious to see what is hidden beyond the thighs, what was exposed were coarse, rough, stretch-marked and mosquito bite-infested thighs.

The women in this breast terror, navel and thigh exposure business lined up on the railway line. Both young and old women found breast-pumping the new fad. From investigation, it appeared that any lady that failed to expose her breast in very tempting manner could is seen as a deviant. It is right to conclude that at Ijora Badia, breasts are on parade; there is a breasts’ fair of a sort any time, any day and for any willing viewer. While some displayed their wares in front of the make-shift wooden houses, others step forward at the base of the rail to display theirs while pretending to be recharge card sellers or phone call vendors.

Investigation revealed they have a ready and booming market in the male folk of the community, who are mostly gamblers, drug addicts and fraudsters. Fighting is not a novel occurrence in Ijora Badia neighbourhood. Checks revealed that in Lagos State, the neighbourhood has the highest number of brothels where deviant teenagers, who ran away from their parents’ homes, find solace. The constellation of these young ladies, who have sold their souls to sex, attracts criminals in the neighbourhood. They are belligerent, testy, violent and can do anything, including stripping themselves naked to vent their anger.

This reporter witnessed what could have been a live adult movie when a teenager almost stripped herself naked. She was having a fierce argument with a male folk beside one of the wooden cabins, while two other boys and another lady encircled them. She walked briskly away from them to the pavement of the rail line where she sat. But the roughneck would not let her be. He followed her to that point and the girl in readiness for what would follow picked up a big stone. But, before she knew what was happening, the man grabbed her by the waist, raising her feet above the ground. When she eventually freed herself from the man’s grip, she quickly pulled off her T-shirt, exposing her breasts as she did so, because she wasn’t wearing a bra.

The breasts dangled dangerously and violently as she proceeded to unzip and possibly remove her shorts, before the man left the scene. It didn’t even bother her that at such a tender age her breasts had become flabby and saggy. As soon as the man left, others prevailed on her to rescind her action, which was to display her nakedness in broad daylight. As the drama was unfolding, most people were not even interested; they carried on as if nothing was happening. Further checks revealed that similar incidents are commonplace in the neighbourhood.

However, the male folks are seen in clusters of 15 and 20, looking rough and fierce, either drinking gin, smoking marijuana, playing ludo, whot cards or draught games. They appeared so rough and fierce that one actually must be very careful to stare at them. And because they engage in one criminal activity or the other, they are always alert and know when a stranger comes into the habitat. They are not like the women whose only trade is to exchange their bodies for money with any willing man.

Men who live among the women in make-shift wooden houses stay inside during the day, except when they want to enter town, but the ones living separate in their own wooden cabins wander around in company of teenage girls. Ijora Badia is not only about prostitution, gambling, hard drugs and alcohol consumption. There are football viewing centres scattered all over the rail line, just as there are film houses in the place. Like most European football viewing centres in Lagos, you see signposts announcing which teams are playing. You also see viewers patiently waiting for the kick-off time, but their composition also leaves much to be desired.

This reporter corroborated this finding when, on approaching one of the film centres, a deep shrill, humming and moaning sound filled the air. Every discerning ear would know that such sounds only come from a woman in deep sexual intercourse with a man. However, in the midst of all these, carpenters were busy nailing woods together, while hairdressers and barbers were equally busy twisting and creeping through their customers’ hairs. Food vendors as well as beer palour operators were all in this neighbourhood struggle to make ends meet. (By Sunday Ani, DailySun Reporter)