Barely a month after his controversial deliverance at TB Joshua’s church, Nollywood ‘bad boy’ Jim Iyke is in a messy paternity scandal with the daughter of a top Lagos-based business man.

The lady in question is Nancy Alofinaka. She claims Jim Iyke cheated on his then Jamaican girlfriend, Keturah Hamilton after he allegedly engaged in secret romance with her last year.

While many thought his deliverance at SCOAN will end his romance battle, but this new paternity scandal may prove TB Joshua and his allies wrong.

Nancy Alofinaka who is currently pregnant has been telling everyone who cares to listen that Jim Iyke is the father of her unborn baby and that she is ready to go to any length to make her case known because she dated Jim Iyke last year.

As if that wasn’t enough, Nancy also claims Jim Iyke tricked her into giving him a sum of 2 million Nigerian naira to renovate his home in Lagos.

Jim Iyke Gets Spiritual About Paternity Scandal On Twitter

As we speak, sources claim the news has reached Jim Iyke‘s hearing.

He is not talking directly about the case but his recent tweets indicate he’s less concerned about the story.

Check out what Jim Iyke wrote few hours ago on Twitter:

“They must really be getting desperate. Its a good sign. It all works for my good. Lol”

“Proverbs 3 verse 4-35. They will continue to try ceaselessly but will meet the same failure constantly. #supremelylifted. Shalom”

“I’ve come to my Rubicon.D secret is laughter.Im happy beyond M most utopian aspiration.So to conspirators,’Hw cn u possibly reach dt realm?'” 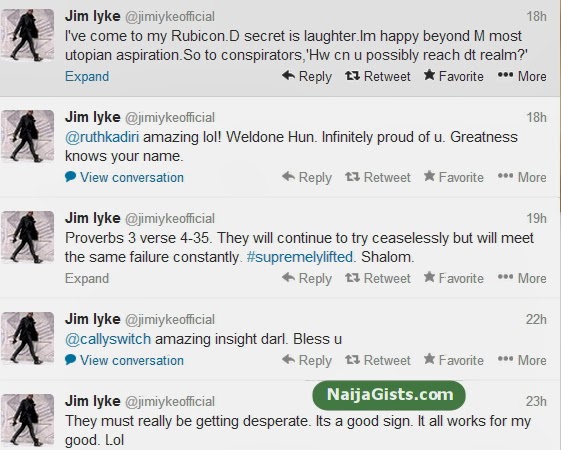 Instead of going spiritual on Twitter, we suggest the actor should rather speak up to clear himself of the allegations.

Jim Iyke is currently in Ghana with his Ghanaian sweetheart actress Nadia Buari.

The two plan to get married next year.

For the record, Nancy Alofinaka is the daughter of a Lagos-based business tycoon. She is an undergraduate student at UNICAL (University Of Calabar).

In an interview yesterday, Nadia Buari claims Nancy is a nobody paid to tarnish Jim Iyke’s image.

Stay in touch with NaijaGists.com as this story develops.