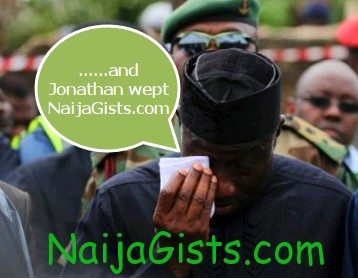 President Goodluck Jonathan on Monday said he was the most criticised President in the whole world and vowed to become the most praised before he left office. naijagists.com

Jonathan however absolved himself of any blame for the country’s problems for which he said he had become an object of criticism.

“I think I am the most criticised President in the whole world, but I want to tell this audience that before I leave I will be the most praised President,” he said at the opening of the 52nd Annual General of the Nigerian Bar Association at the International Conference Centre in Abuja.

He added, “Sometimes, I ask, were there roads in this country and Jonathan brought flood to destroy the roads?

“Was there power and Jonathan brought hurricane to wipe it out?

“If Boko Haram is that of poverty in the North, were there farms and Jonathan brought tsunami and drought to destroy them? Within two years – is that possible?

“But what I can tell Nigerians is, ‘let those talking keep talking, time will tell.’”

The keynote speaker at the event, Bishop Matthew Hassan Kukah of the Sokoto Catholic Diocese, had earlier picked holes in the 1999 Constitution and said the President of the Federal Republic of Nigeria was the most powerful President in the world.

Kukah also said a messiah was needed in the country, but he emphasised that the identity of the messiah was still unknown.

The President’s spokesman, Reuben Abati, had in an article in The Guardian newspaper on Sunday defended Jonathan against insinuations that he was a drunk and glutton.

Abati wrote, “We are not allowed to touch alcohol. Alcohol is not served during official duties. Yes, when there is an international function, wine is served, but nobody gets drunk around here (Presidency). That will amount to an act of indiscipline.

“The President himself does not allow alcohol to be served at his table. But when you go to social network media, they tell you something else. Lies. Lies. Lies.”

He said, “On the issue of state police, everybody knows I have been Deputy Governor and Governor in Bayelsa State, there was a time we were frustrated and we felt that we should have our police, that we would be able to manage criminality in our state better because of our local environment.

“Police from other parts of the country find it difficult to go into the waters, but for us who were born inside the water, even in the night we can enter ordinary canoe to go anywhere and we feel that if we have our local police it will be better for us because our police can reach everywhere in our state.

“But when I discussed the issue of state police with former presidents before a state council meeting, they said it is a good idea, which probably one day we will get there.

“And that is the emphasis I want to make, one day we’ll get to that point. But presently we have to be careful on how we go about it.”

He added, “Experiments have been made, there was a time when the police came up with a policy that police officers from the rank of inspector and below should be posted to their states of origin as a way of testing whether police familiar with the environment will make changes. But it was realised that when police officers from the rank of inspector down were posted to their state of origin, things became worse. So the police had to discontinue that policy.

“We also feel that looking at the federal level and the way the governors are handling elections in their states with the state electoral commission, where opposition parties hardly win even councillorship elections.

“So, if there is state police and the governors manipulate their state police the way they are manipulating their state electoral commissions, the instability that it will create, even what we are witnessing will be a child’s play.”

President of the NBA, Joseph Daudu, SAN, had in his address backed calls for the creation of state police in the country.

The NBA also condemned the level of insecurity and corruption in the country, and told the President that he would go down in history as the architect of a modern Nigeria if he revived the anti-corruption campaign.

The theme of the conference was ‘Nigeria as an emerging market: Redefining our laws and politics for growth’.

In apparent response to calls for the convocation of Sovereign National Conference, the President said in his address that democratic structures were already in place in the country.

“It is important to appreciate the existence of a democratic structure in the country, which, no matter our opinion, cannot be wished away,” he said.

Kukah, in a paper titled, ‘Nigeria as an emerging democracy: The dilemma and the promise,’ had said that due to the nature of the country’s constitution, the President of Nigeria was the most powerful in the world.

“The President of Nigeria can, as I am standing here now, decide to allocate an oil well to me,” the cleric said, drawing laughter from the audience.

“To be the President of Nigeria, you have to have the capacity to do well and that is where motive becomes important,” he added.

Noting that Nigerians were looking for a messiah, Kukah said only a Nigerian could lead the country to the Promised Land.

He added, “Nigerians are looking for a messiah, but a messiah is not going to come from another planet.

He noted that all the Presidents since the country’s independence came to power by accident.

“There is no President of Nigeria till date that did not come to power by accident.

“This should teach us to be more modest because God always finds a way of bringing somebody who was heading somewhere else – who has no ambition,” he said.

Kukah went ahead to stress that “the Constitution as it is does not have the capacity to deal with the fine issues of a complex country like Nigeria.”

The cleric noted that calls for state creation are largely selfish.

He emphasised the need to address difficult questions in the country, like the country’s membership of the Organisation of Islamic Countries, the implementation of Sharia law in parts of the country, and the need for state police.

“When Shagari became the President of Nigeria, not a single Muslim in Nigeria mentioned Sharia law, because we were all busy eating,” he said(punchng report).