Posted on December 1, 2017 by Naija Gists Leave a comment 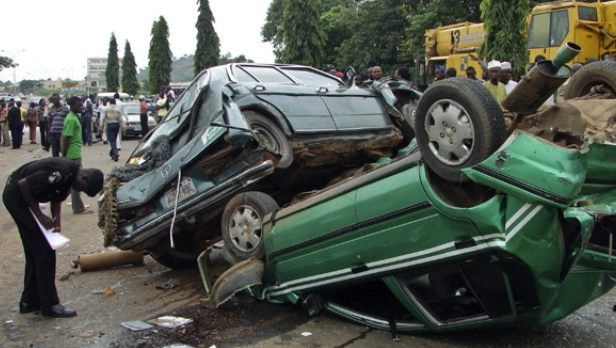 Early November, five persons died and many others were seriously injured in an early morning multiple road mishap at the famous Kara Bridge, just by the Lagos end of the Lagos-Ibadan Expressway. Viewing the gory scene of the tragic event through various media platforms was quite distressing. Three of the victims reportedly died instantly while the other two died in the hospital. Reports had it that about 55 people were involved in the accident, 40 men and 15 women.

An account of the incident revealed that a tanker laden with 33,000 litres of Automotive Gas Oil (diesel) rammed into a stationary truck carrying brewery products. The resultant oil spill on the road resulted in the multiple crashes involving some trucks and cars. Conservatively put, not fewer than 16 vehicles, comprising eight trucks and eight vehicles were involved in the multiple crashes allegedly caused by the spilled diesel on the road.

As if the lives that wasted through the gruesome incident weren’t enough for that day, reports had it that two other people died in another accident which involved a collision between a truck and a train in the Fagba axis of Lagos State, on same day. So, it was a rather busy day for men and officials of the Lagos State Emergency Agency, LASEMA, who had to move immediately from that incident on the Kara Bridge straight to Fagba for rescue operation.

Characteristically, many have tried to establish a connection between these bloody incidents and the usual ‘ember’ months’ tragic jargon. The so-called ‘ember’ months, which refer to the last four months of the year from September to December, are naturally regarded as tragedy-prone period. This belief is so entrenched in the consciousness of the people that various religious groups and other relevant institutions regularly organize special prayer sessions and seminars with a view to minimizing ember months’ havoc.

The reality, however, is that the so called ‘ember’ months are not really spiritually jinxed as many might want to swear they are. Tragedy occurs in ‘ember’ months just as it does in every other month of the year. Ascribing needless spiritual and mythical undertones to tragic happenings during the ‘ember’ months could just be the usual Nigerian way of trivializing issues. Rather than clothing the ‘ember’ months in a garb of gratuitous mystery, the pragmatic way of explaining dreadful events during these months is more human than mythological.

The truth is that there is usually an increase in the tempo of public, private and corporate activities during this period. Religious bodies are equally not left out of the frenzy of the season as they organize various events during the period. The ‘ember’ months are always the busiest on our roads for obvious reasons and the tumultuous air of festivity do not really help matters. It is a period when people are in so much haste to make all the money they have not made since the beginning of the year. Hence, commercial drivers, who usually embark on five trips per day, capitalize on the aura of festivity to go for 10 trips. This, naturally, comes with its fatal consequences. It is only logical that when there is a mass exodus of people from one place to the other, there is bound to be a measure of uncertainty and disorder.

The bottom line, therefore, is that tragic occurrences are bound to happen during the ‘ember’ season because of the intensity of human activities. In a bid to be part of the various end-of-year activities slated for the period, a lot of people throw caution into the wind by disregarding critical safety issues. Vehicles are driven irresponsibly. Alcoholic drinks are consumed with reckless abandon while social outings are organized as if tomorrow will not come. The atmosphere, during the season, is often filled with unusual allure and jollity. It is in the midst of this hilarity that avoidable human blunders that result into diverse kinds of misfortunes usually occur.

Hence, it is imperative for everyone to, first and foremost, have a changed perception of the ‘ember’ months. Hence, conscious efforts must be made to disrobe the months of every garb of unfounded mysticism. It is only when we are convinced that the dangers associated with the months are human rather than mythical that we could really make considerable progress in averting disasters during the months.

Therefore, enforcement of existing laws and attitudinal change is central to making any progress. Sadly, law enforcement agents are also involved in the mad ‘ember’ months’ rat- race. In a bid to make some ‘extra’ buck to furnish special festive ‘necessities’ , they usually engage in treacherous compromise that encourages lawbreakers to go un-punished. The result, of course, is the continuation of avoidable circle of pandemonium and sorrow.

Consequently, as we march towards the end of the year, we must modify our views on the ‘ember’ months. We must not get involved in any pointless extra-ordinary end of the year ‘rush’ that could endanger our lives, and indeed, those of others. Those who have to organize social events to correspond with this period should do so bearing all safety precautions in mind. Commercial drivers and other road users must respect the sanctity of the human life by observing required road safety measures.

Perhaps, more importantly, relevant government agencies must step up enlightenment campaigns as well as enforcement strategies to guarantee that ‘ember’ months’ crashes and other related tragedies are reduced to the barest minimum. In this respect, the Federal Road Safety Corps, FRSC, and the Lagos State Traffic Management Authority, LASTMA, should be commended for their various ‘ember’ month’s safety strategies, in Lagos and adjoining states.

However, there is a need for them to intensify efforts in this direction while more appropriate government agencies should also come on board the ‘ember’ months’ re-orientation and re-awareness project. Presently, the Lagos State Ministry of Information and Strategy is embarking on an ‘ember’ months’ responsiveness campaign across the state. The objective is to change the attitude of the people towards these months and offer key safety tips.

As it has been previously affirmed, it is critical to re- affirm that tragic happenings during ‘ember’ months are promoted by reckless human actions. It is only in living modestly and responsibly that we can avoid the dangers and hiccups that are generally associated with ember months. If only we could rid ourselves of our usual ‘ember months’ excesses, we would discover that nothing is actually wrong with the months.

[About the author: Tayo Ogunbiyi is of the Ministry of Information and Strategy, Alausa, Ikeja.]