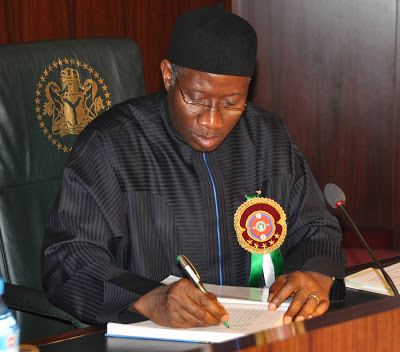 April 6, 2015 – Is Goodluck Ebele Jonathan A Hero Or The President That Did The Right Thing At The 11th Hour?

Unfortunately in Nigeria of today, majority of the populace are so used to; maladministration, corruption in all strata of our society, non-accountability of government officials and lack of transparency, so willy-nilly and, the effects of all the aforementioned transcends to ; constant interruption in electric power supply (if any at all) in some areas, bad roads, insecurity everywhere in the country and non-functional government.

In fact the effects of these long periods of non- functional government in Nigeria- has left some of us permanently mentally scarred and brainwashed into thinking- when a government official, is doing the right thing we tend to think they are doing us a favour…like the late Fela Anikulapo, said and I quote; “Animal can’t dash-me my property” because human right is my property. Some of us suffer and smile…& as Fela Anikulapo would put it again “Suffering and smiling”! This is what we Nigerians do.

What the outgoing president (Goodluck Ebele Jonathan) did- by conceding defeat peacefully and congratulating his opponent after the election, was and is still the right thing in a normal civilised society. Hence, I will continue to commend him-Jonathan, for this singular act of allowing Democracy to triumph in Nigeria.

Hence the situation of Goodluck Ebele Jonathan handing over power peacefully looks very abnormal in the eyes of many (albeit it is the right thing to do in a normal situation) but I must also acknowledge that the Nigeria situation and the society is an abnormal situation. Hence the political rigmarole and conundrum we often find ourselves.

Please let us not get things twisted here by forgetting so quickly about the insecurity that has plagued this country in the last six years and, the reckless abundant squandering of our scarce resources with enormous impunity. Having said that; I will continue to acknowledge and commend what Goodluck Ebele Jonathan, did after the election and indeed for democracy in Nigeria-by conceding defeat so graciously and peacefully which is so worthy of emulation and precedence.

Unfortunately one cannot say the same about retired, Gen Ibrahim Badamasi Babaginda who annulled the 1993 June 12, presidential election. An election adjudged then to be the fairest and most peaceful election held in the history of Nigeria. One could only best describe this man – Babangida; as a disgruntled evil person who is so filthy rich -through corruption and embezzlement of our national resources-but lacks a lot of integrity.

I can only pray and hope that Muhammadu Buhari will be competent enough to steer this great country back in the right direction. I also hope he would be smart enough to choose his cabinet carefully; thus avoiding the political prostitutes and the professional sycophants in his government.

Continue Reading
You may also like...
Related Topics:hero, jonathan, nigeria