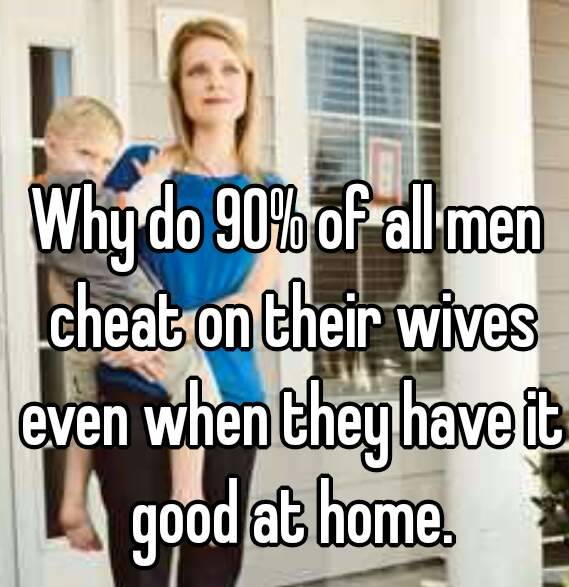 The brutal truth is that most men [greater than 95%] are seriously plagued by this cancerous virus of unfaithfulness.

BIOLOGICAL FACTORS
Biologically/naturally, man is almost always ready for for sex unlike his female counterpart. The act of sexual intercourse is easier for the man than for the woman. If you are experienced in that area, you will understand what I mean. Again, from Jan to Dec he doesn’t menstruate nor does he have a taste of the stress(headache, severe abdominal pains, weakness due to blood loss, mood changes, etc) associated with monthly menstruation(12 times or more in a year).

Immature husband has the tendency to run away from his wife during this period instead of showing her love and care to ameliorate or mitigate the sad experience his wife is going through. Some men who have very high libido(sexual desire) find it extremely difficult to curb their sexual urge during moments like this. Some go as far as sleeping with their wives against her wish when they are in flow, while others say in their mind ” God, you see, this is where you made a mistake, I mean I can go to someone else and satisfy myself as I wait for my wife.”

When a woman is pregnant , she is faced with diverse physiological changes. Sometimes they are plunged into a very miserable state for months just because they about to bring another life into existence and this period is definitely not pleasant for romance. Then the man with the trait to cheat faults God over this beautiful experience of procreation and off he goes looking for an illegitimate alternative to quench his animalistic sensual thirst.

Another biological reason is encapsulated in what MS ERANKO said.

We are not ruling out the negative effect of libido inequality between husband and wife. There may not be any problem if the discrepancy is narrow but , where there is a chasm (huge gap) between the husband’s libido and that of the wife(either way) , hmmm, serious palava dey.

SOCIAL FACTORS
This can be attributed to negative influence on the man both from friends and they kind of work he does( musicians, actors, some so called men of God or men of god, long distance drivers, captains, pilots, politicians, merchants, etc). I am not saying that all of these people are philanderers but they are more exposed to sensual challenges than other men.

Some men got themselves exposed to too many women sexually before the got married to their wives and now their wife is nowhere close in bedmatics to that sex machine they once had as a girlfriend, what do expect from this man?

CULTURAL FACTORS
In some cultures, it is not a big deal for a husband to sleep around. There is this country in Africa(can’t remember the country now) where it is the norm for men to share their legitimately married wives with other men. Even before the advent of Christ, it wasn’t a problem for a married man to mess around. Someone in the old testament days had 700 BEAUTIFUL wives of royal blood and also had 300 concubines on top of that. That is king Solomon for, the man named in the Bible as the wisest man that ever lived.

PSYCHOLOGICAL FACTORS
There is this air of freedom and authority around the male folk than their female counterpart and this makes us think or feel we can indulge in any activities even the most dangerous ones. Also, most men have this sense of ownership over the women(most women like men who are intimidating until it start biting them) and that makes us overly adventurous.

SPIRITUAL FACTORS
Satan is a master strategist and he knows who/where/how/when to strike and whooz, the peaceful family structure comes down crumbling. That is why he strikes the husband mostly(the head of the family). He use the most appealing, most powerful but most subtle weapon (extramarital sex) to gradually erode peaceful homes. This is where the wife ought to be spiritually alert(I mean prayerful). She should be able to see it(sensual temptation coming on her husband’s path), pray fervently against it and if need be caution her husband about it lest the enemy strikes with his most lethal weapon and the rest is history.

Some men are very good husband, easy-going and they are the pride of their good wives but, they are under spiritual influence (either from their family or from the former girlfriend[s]) and these men no matter how hard they try not to cheat , if they are not freed from that influence from within, they will certainly fall one day.

The conclusion of the matter is, no matter what a man is using as his excuse for cheating on his wife, God says ” Oh man, you are inexcusable before the judgement throne of your creator _ Romans 2:1. Just like Elijah in book 1 Kings 19:18 who thought he was the only prophet remaining only for him to shocked by God who told him that there were 7000(seven thousand) undefiled prophets in Israel, that is why we still have millions that are faithful to wives in our generation.

As for me, the worst sin a man can commit against his wife is the sin of adultery.
You betray your wife each time you sleep with another woman.
You expose your wife’s nakedness to the public each time….
You say to your wife ” you are not worth it each time…

[Article by Dede, a popular commentator on NaijaGists.com]