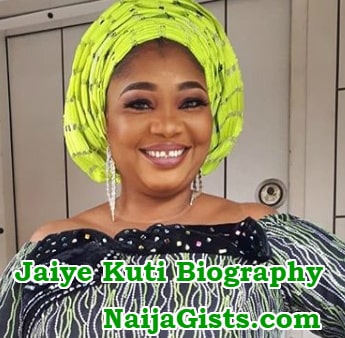 Jaiye kuti is a Nollywood actress, producer and the Chief Executive Officer of Jaylex Aesthetic productions. Her company is in the business producing movies and TV entertainment. She came into the Nollywood industry in 2002 with her debut series Laff Patterns which brought her into the lime light. She has featured in several movies and TV series since then some of her series include: Laugh Patterns, Everyday People, Face to Face.

Jaiye Kuti Biography and Net Worth

Jaiye Oluwakemi Kuti was born on the 10th of July. Her actual age is not common knowledge as she hardly shares this with the public. However, her birth year is speculated to be around 1968-69. She was born in Ilaro a town in Ogun State. Jaiye Kuti is said to have attended Ikorodu Grammar school. She is from Lagos State and also resides there. She is reportedly married with two children a male and a female.

Jaiye is a talented actress who stars in English as well as Yoruba movies. She is said to however prefer starring in TV series as it allows her more time with her family and it supposedly pays her better than regular movies. Before venturing into acting in 2002 she had a regular day job where she worked as a personal assistant. However, she always knew she had the talent for acting but was not brave enough to venture into this line until 2002. She has a Net Worth of about a $100,000.

Jaiye Kuti is rather famous in the movie industry as she commonly features well known actors and actresses in her movies like Wasiu Alabi (pasuma), Bimbo oshin, Akin Lewis, Ayo Adesanya, Funsho Adeolu, Lanre Balogun and several others.

This movie features several iconic actors and actresses like Richard Mofe-Damijo (RMD), Iretiola Doyle, Odunlade Adekola and Jaiye Kuti. The movie centers on the lives of two couples, each with their own marital challenges. It was directed by Yemi Morafa and produced by Funmi Holder.

Produced in 2017, this movie stars Jaiye Kuti and Adeniyi Johnson. It tells the story of a wealthy woman whose breakthrough depends on a stranger who she once came in contact with.

Also starring Jaiye Kuti, the movie focuses on a happily married couple who is torn apart by an interfering mother in law.

Another movie starring Jaiye Kuti, the movie creates an entertaining picture on the lengths a lady is willing to go through in her quest to be famous.

This movie is crafted to follow an epic setting. It talks about a slave who by divination is set to become king of the land. The movie features Jaiye Kuti.

The movie centers on a lady struggling to make a living as a maid. Long hidden secrets are later revealed when the truth comes to light. It features Jaiye Kuti amongst others.

A jaiye Kuti production, this movie depicts the story of a man who jumps at the opportunity to become a monarch against the advice and wishes of his wife. His position changes him for the worse.

The movie was produced by Jaiye Kuti and stars her as the lead actress. It features Wasiu Alabi who plays the role of her husband in this movie. It also stars Femi Adebayo, Yinka Quadri, Fathia Balogun and Adebayo Salami. It depicts the story of a mischievous lady who creates trouble wherever she goes.

The movie features the likes of Funsho Adeolu and Bimbo Oshin. It revolves around a happy family who is troubled by a seemly mentally unstable woman (Jaiye Kuti). However, past secrets later begin to unfold. Produced by Jaiye Kuti it is definitely worth a watch.

The movie centers on a conspiracy surrounding the heir to a massive fortune. It is a well crafted story with a blend of drama, suspense and comedy. It was produced by Jaiye Kuti.

Jaiye Kuti is reportedly married with two children. From several indications, she has been married for years probably even before going into the nollywood industry. The identity of her husband like many other things about Jaiye Kuti is also kept a secret. 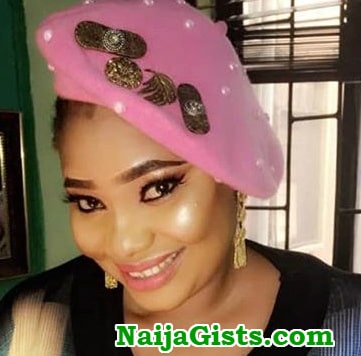 She however did reveal that her husband is not bothered by the fact that she is an actress and is in complete support of her career. Her decision to stay clear of playing intense romance roles is her decision alone as her husband supposedly encourages her to play her romance roles with more emotion.

Fela Kuti was a musical icon admired and remembered by many. He was a musician of the Afro beat Highlife genre of music. Fela was born October 15th 1938 and died on the 2nd of August 1997. He was born into an influential family in South West Nigeria which was at the time of his birth under British colonial influence.

His mother was a popular female activist chief Mrs. Funmilayo Ransome-Kuti while his father was an Anglican Minister and also a School principal. Fela Kuti is said to have been the first cousin of Nobel Prize winner Wole Soyinka.

Fela studied music at the Trinity college of Music London instead of medicine which he was originally supposed to study. He is said to have preferred playing the trumpet to other instruments, Fela formed a band known as Koola Lobitos. The band specialized in playing a blend of highlife music and jazz.

From his first marriage to a woman called Remilekun Taylor, he had three children named Femi, Yeni and Sola respectively. Later in his life he stopped using his middle name Ransome as he referred to it as a slave name. Fela took up the name Anikulapo meaning one who has death in his pocket. Until his death in 1997, Fela is believed to have made enormous contributions to society through his music and activism. He remains a music legend and an inspiration to many till date.

As a result of the similarity in name to the famous Kuti family, questions about Jaiye Kuti’s relationship to this family have often been raised. It has been assumed that she is the daughter of late singer and activist Fela Anikulapo-Kuti this is however not true as she is not the daughter of Famous singer Fela Kuti. Jaiye Kuti is said to have lost her real father in 2015 at the age of 70. Until his death, he was an Apostle of the Cherubim and Seraphim church.

Jaiye Kuti is viewed as an exemplary actress who has effectively been able to combine the demands of her career with the needs of her family.

Nigerian Soldier On Battlefield To Wife: Take Heart If I Don’t Come Back
How To Stop Worrying About The Future, Health, Relationships, Work & Things You Can’t Control