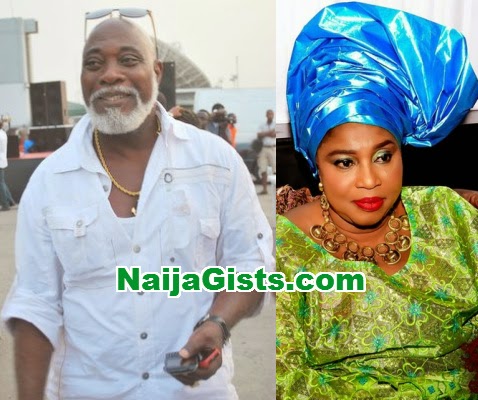 March 3rd, 2015 – Jibola Dabo: I Was Sexually Abused By Older Women While Growing Up, Ayo Mogaji Was My Girlfriend, Baby Mother

Veteran Nollywood actor Jibola Dabo has broken his silence on his relationship with star actress Ayo Mogaji aka Binta.

The actor said he met Miss Mogaji back in 1980 after he returned from abroad and that the two dated for a while before going their separate ways when the relationship hit a dead end.

When asked why he has so many kids with different women, the actor said:

“Growing up, I was notorious with ladies and they were notorious with me as well. During that time, girls had this perception that they could tie you down if they got pregnant for you. It happened to me with different girls because I was very popular and good looking. The girls kept coming to me. Also, there was the lack of knowledge of protection.

When I grew up, I met kids that I fathered and did not know because their mothers did not tell me that they were pregnant. Many women came to me because they want have babies for me, it is very true. People misjudge me now because of that. If a girl went through what I faced as a child, the experience would be tagged as child abuse. I had older ladies come to me for sex as a young man.

It was child abuse, but nobody was focusing on child abuse for boys back then. Instead, people prefer to judge me. I would not be talking about this now if I am not grown and have more understanding. I could not have turned them down, because my feeding depended on that ‘aunty.’

It happened when I stayed with relatives. Some of their female friends liked me and made me do things a young boy should not indulge in. I would say that the media made a pool out of a tea cup. Ayo Mogaji was my girlfriend in the 80s and when I returned to Nigeria, she was still unmarried. I funded a movie for her and we started dating again. She got pregnant for me and that was it.

The media began to say that her husband abroad had come back home. I never got married to her; neither did I go to her parents to ask for her hand in marriage. She was my girlfriend and she got pregnant and I could not ask her to abort the baby. I was old enough to have a child, so I had no objections.

I love my son a lot and now she has her husband. Our lifestyles were not the same and that was why couldn’t marry her. Not because she drinks and smoke that I couldn’t marry her. She was like that even before I came back to Nigeria. I had known her for about three decades and she had always been like that. That is her style. I read in the papers after she left me where she said, ‘I drink, get drunk and smoke, so what?’ It was on the front page.

So if I could not take that, I would let her go. I could not change her because I am not God, but I tried to convince her to stop drinking and smoking”, he explained.