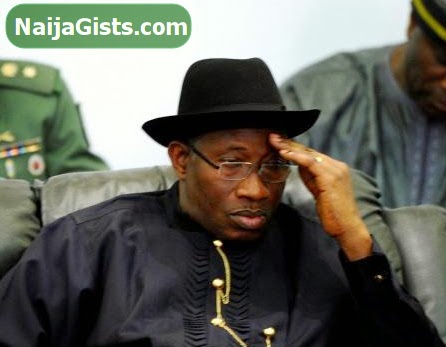 Sept 8, 2014 – Jonathan Promises To Win Boko Haram If Reelected At House On The Rock Church Abuja

Goodluck Jonathan yesterday assured Nigerians that his government will win Boko Haram before the end of his 2nd term if he is reelected.

He thereby urged Nigerians to take heart and not lose faith.

The president’s appeal came on the heels of report of Boko Haram sect making in road into the country and allegedly capturing some towns in Borno, Yobe and Adamawa states.

Jonathan, who described insurgents as enemies of progress, called on Nigerians to support his administration to build a peaceful and pros­perous nation.

Represented by the Min­ister of Agriculture, Akin­wunmi Adesina at the dedi­cation and commissioning of the Citadel & Towers, Na­tional Transformation Centre by House on the Rock, in Abuja, at the weekend, he said: “We need to arise and pray for and encourage our security forces. God is with Nigeria and we shall over­come. Like a citadel, like a tower, Nigeria is rising.

“Nigeria is a great nation and has tremendous poten­tial, which requires all hands to be on deck to unlock. Ni­geria is rising; it is today the largest economy in Africa. Our economy is robust, as we continue to diversify.”

He said his administration was already working on fix­ing the critical sectors like the rails, road network, mod­ernising airports and improv­ing the nation’s education and health systems, all aimed at bequeathing to the genera­tions coming behind a viable country.

Commending House on the Rock for its vision, drive and commitment to­wards nation building and building a generation of great leaders, Jonathan described the church building as an ar­chitectural masterpiece and commended the resident Pas­tor, Goodheart Obi Ekwueme for putting up the edifice.

Politics as usual!!! What is the guarantee we will win this war when the terrorists are being sponsored by top politicians in this present administration who have contacts in the military.

Let Jonathan swallow his pride and step down jejeli. He might have tried in the other aspect, he has failed woefully on the security front. #Truth is bitter #jonathanmustgo

Man Who Sent Robbers To Uncle In Festac Confesses “He’s 1 Of D Richest Men In Lagos”
“My Dad Is Happy I Moved To Nigeria” – Segun Odegbami’s Daughter, May7Ven