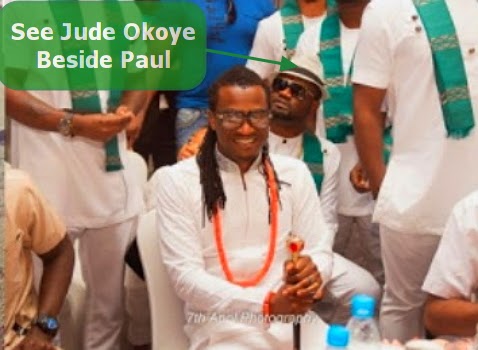 Guys please make u no say my own too much oooo…. but I must speak my mind.

Do you remember the controversy that happened last year during the wedding ceremony of Lola Omotayo and Peter Okoye in Lagos?

If you don’t, let me give you a recap.

Last year, a reliable source told NaijaGists.com that Jude Okoye didn’t like the fact that Peter married a lady from another tribe.

Because of his deep hatred for Peter’s choice of wife, he allegedly ignored the wedding.

Today in Port Harcourt, Jude was present at the wedding ceremony of Anita Isama and Paul Okoye.

Though he tried to hide from the camera, he was seen sitting beside Paul.

But why would an elder brother do such a thing? Partiality no good o….

Am not taking this issue personal cos e no concern me but I must speak my mind. #freedomofexpression