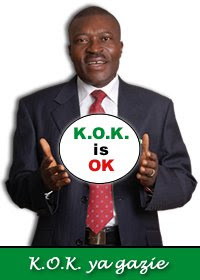 The talented actor who yielded to the call of God few months back has gotten a political appointment in President Goodluck Ebele Jonathan’s administration.

Kanayo O Kanayo who was born in Imo State on the 1st of March 1962 has been announced as the chairman of NIHTS board.

The National Institute For Hospitality and Tourism Studies is a new body that oversees the Nigerian tourism industry in the present administration.

According to insiders, the actor’s new relationship with Oronto Douglas Oronto, a powerful voice in the current administration facilitated his political appointment.

The actor took to his social networking page few hours ago to thank God for such an honour.

“Thank you Lord for this responsibility! Like Solomon, I plead for your wisdom.” – Kanayo O Kanayo said in a tweet.

The actor-turned full time pastor is now a politician.