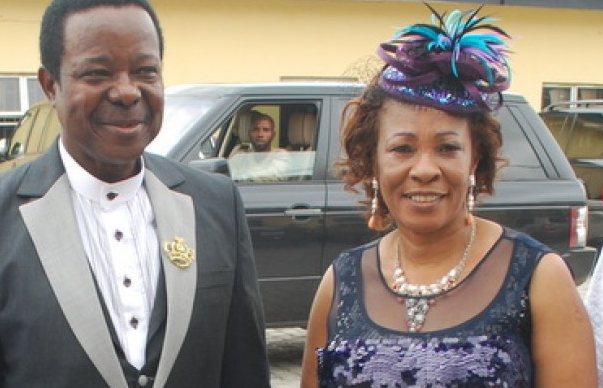 The couple met about 30 years ago when the Juju maestro was already a household name in Naija and worldwide.

In this interview with Paul Ukpabio, she talked about life as a celebrity wife and how she has been coping in her marriage to the polygamist.

How does it feel to be married to a popular musician like King Sunny Ade?

My husband is well known around the world, and I do recognise that fact and have lived with it. Let me give you an instance of his popularity: I was once traveling to America. At the Immigration point, the officer asked me where I work and I told him. He looked at me and asked who my husband is. I told him I am Sunday Adeniyi Adegeye’s wife.

I didn’t even know that the Immigration officer had once lived in Nigeria and knows my husband. He quickly looked at his computer. He looked at me again, and asked, ‘Who is Sunday Adeniyi Adegeye?’ I told him he is also known as King Sunny Ade (KSA). He said ‘Wow!’ He then asked where I served as a honourable member and I asked him if he knew Nigeria. He asked me to answer his question first. I told him I represented Amuwo Odofin. He laughed and told me about Mile 2 and Festac Town. So, his popularity is always rubbing off on me wherever I go. Not only me, but all members of our family.

Very well! That was what inspired me to marry him when I was young. I have been a great fan of his since I was a child. It is his music that I love, and I can even say that I hardly like any other music as much as my husband’s music up till date.

Which of his songs do you like the most?

(Her face lit up with joy) The one I love the most is Oro t’o n lo. I was in the third year in secondary school (when it was released). I recall also at our school’s end of the year party then, his music was the music we danced to throughout. I actually danced to it till the next day. Afterwards, I was focused on Sunny Ade. I wasn’t really thinking about any other thing as much as marrying Sunny Ade.

How did you eventually meet him?

Of course, we met much later through one of his friends who is now late. They were mutual friends, though the man was much older than Sunny Ade. His friend was very familiar with my family. He also knew about my interest in Sunny Ade and my undying love for his music even back then. If you must know, I used to clamour for his records. People around me at that time knew of my love for his music because I was also a good dancer and I loved dancing to his music. So the man, I mean Sunny Ade’s elderly friend, connected us and it turned out very well.

So where eventually did you meet?

We met in Ibadan. It was not at a party. The first time we met was at my mother’s house.

What was your impression of him after you met and how did you feel afterwards?

I was very happy. I felt indeed very happy. He sent a driver to pick me. That same driver is still with him till today.

And what happened after?

He proposed marriage. He had been told about my unusual love for his music. He said, ‘So, you like to dance to my music? He asked me a lot of questions like where I come from and so on; from the surface questions to the deepest questions. I was there excitedly giving him answers, responding like a computer (laughs).

So many years after, what can you say about the marriage?

Yes, eventually, we got married and God has blessed our marriage. I thank God that I am still with him today and even tomorrow. I have never had any cause for regret.

But what was your parent’s reaction when he came to marry you?

My family agreed to the marriage. You know I am talking about 30 years ago. My mother was supportive from the outset. My father was cautious because he said Sunny Ade is a Christian while we were Muslims. But it didn’t take long before all my family members accepted that I marry him. My father consented to it. When my father died, King Sunny Ade was the one that did everything for his final burial. I thank God and I thank my husband. My prayer is that he lives long to be there for me and us all.

What are the things that you admire in your husband, apart from his music?

There are so many things I admire about him. He is peaceful. He avoids quarrels and quarrelsome people. And he always gives good advice to his wives and children. Again, I admire him because of his humility. Oh, he is so, so humble and I wish him long life and that he does not leave us until he is over 120 years.

And you think that is possible?

Yes, it is possible, because his mother died about that age. I don’t mind if I go at 94, but I want him to be around because there are so many people who depend on his umbrella, who depend on his wings of love, and he will need to be there for them. He is a responsible man and a man of the people who loves to have people around him and loves to help them too. So, I will continue to pray for him.

Is there any special thing that you know that most people don’t know about your husband?

What do you love about your husband that keeps you going?

He trusts me. He knows what I can do and what I cannot do. My husband has been my great supporter. My husband gives his wives and children freedom to choose the different areas that they can contribute to the community. If I die at the age of 95 and eventually I come back to this world, I still want to marry KSA. As a woman, I will always want to marry him.