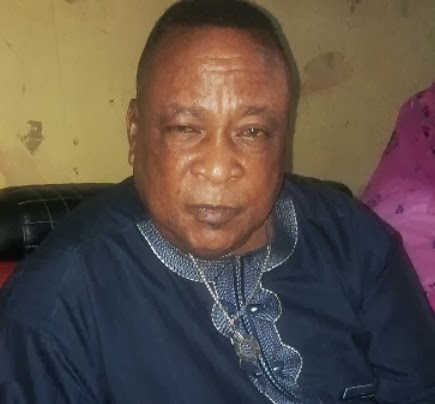 Veteran Fuji musician, Kollington Ayinla popularly called Kebe N Kwara is having some tough time in his health and finances.

As we speak, the Fuji icon is battling ulcer and typhoid fever and has been in and out of the hospital for several months.

After spending his fortune on the strange illness, Kollington Ayinla admitted to Encomium magazine that his sickness is spiritual in nature.

He has since put his mansion in Alagbado area of Lagos state Nigeria on sale for 80 million naira.

Read excerpts from his recent interview with Encomium magazine below:

A couple of months back, it was reported that you’re seriously ill. They even said it was a strange ailment and that you’re hospitalized in a private hospital and all that. What’s the truth about the whole thing?

What happened was that most of your people don’t do their investigations very well before writing their stories. I felt hospital a long time before they reported that I was sick. They even said a governor’s wife visited me at the hospital and when she was leaving her car killed somebody along Lagos Abeokuta Expressway and many other things that are not true.

I had left the hospital for about two months back. Even the day the story was not, I was in Osogbo, Osun State performing at an event alongside Musiliu Haruna Ishola. The effect of this, is that if anybody wanted to invite such an artiste for a show, they would consider meticulously because they may also believe the person was truly sick. That’s unfair.

But were you not truly sick then?

Nobody is above sickness. And the body also needs rest. Anybody can fall sick at anytime, including the doctors taking care of the sick. So, what are we saying? I was sick but I was already out of the hospital, going about my normal duties as a musician before they reported that I was not feeling fine. Do I look sick? Definitely, no.

What was the nature of the sickness?

I had ulcer and typhoid.

How many days did you spend in the hospital?

I spent up to two weeks

Which hospital was that?

Who were the people that came to your aid?

A lot of people. I am using this medium to say a big thank you to them all. But I must specially thank Governor  Babatunde Raji Fashola for his support. He was the first person Wasiu Ayinde (K1 de Ultimate) rushed to and informed him of my health situation. And immediately, the governor responded very well. K1 also called on Governor Rauf Aregbesola in Osun State. Immediately the governor was told about my condition, he quickly sent money to me. I really appreciate what Governor Fashola and his counterpart in Osun, Aregbesola did for me. May God continue to be with them. And equally, K1 de Ultimate really tried for me. If not for his effort, these two governors wouldn’t have known anything. He called and told them I must die. They should do everything within their means to rescue me, and they surprised me. I pray God will be with Wasiu Ayinde as well in all his endeavour.

(Cuts in )Yes, it’s a strange ailment. It’s spiritual. That’s the best way of describing it. But I thank God I am still alive. My health condition then was worsened by the poor economic situation of Nigeria, nothing is working. Everything is paralysed.  I kept thinking to the extent that I wanted to sell my property. If the government had not turned everything upside down, people like myself are not supposed to be suffering likes this. And the irony is that most of these people in government were not that bad before coming to power. It’s only after getting there that they turned otherwise. We pray that they change and remember the day of accountability. At times, I wonder if this wasn’t  the same Nigeria. Even when Babangida was there, things were very much better. I released a lot of albums to inform Nigerians about the happenings in the country and even beyond. In an ideal society, the government owes people like us a great responsibility.

It was reported days back that you have put this mansion for sale, how true is it?

It’s true. When you don’t have money, you use whatever you have to get what you want. I don’t have money, and I need money. I can’t just be looking at the building, I can’t eat it. I need to convert it to money. But not the whole property that I want to sell. It’s just this uncompleted structure directly opposite us (show reporter the building). I need to make that clarification so that people out there won’t be misinformed. I am only selling part and not all the property here. This is where I live.

How long have you been working on the house before you decided to sell it?

I have been building if for about 14years. Had it been I am financially okay, I should have finished it. I am tired of falling sick all the time. Let me sell my property and have money to do other things. I also want government to assist me, I don’t want to be suffering in silence.

What do you intend to do with the money?

I will use part of the money to build another small bungalow within this compound. I will demarcate the place. Also, I will invest the rest of the money in a business that will be generating more money for me. If you can recall, in 1984, I established Kollington Fish Depot, at Adura Bus Stop, Lagos Abeokuta Expressway, Lagos. Everything was okay then but later I took ill. It was so bad that I had to sell the depot to take care of health then. May God save us from domestic antagonism.

Let’s agree that your sickness has been spiritual all this while, what have you been doing to address it?

I put everything in the Hands of God. Also, I don’t relent because if you’re being chased by a masquerade, you keep running. That’s why I am crying out loud and clear so that whoever God has sent to me can help me. I can’t continue to be hiding my broken hand.

Did you inform your children of the decision to sell the property?

Yes, they are aware of my decision but there is nothing they can do about it. Most of them are in United States of America. They are all in school. It’s after their education that they can start working. They all supported that I should sell it and spend money on whatever I like. There is problem all over. It’s because I voiced out, that’s why you have the privilege of knowing all these. A lot of people face tougher times than I do but they don’t want their situation known to the public. As for me, I can’t be suffering and smiling at the same time. Whatever people like, let them say.