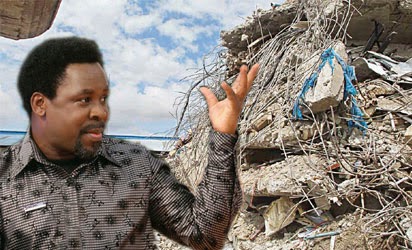 Oct 8, 2014 – Lagos Nigeria Church Collapse: Before TB Joshua Blame It On Me By Comrade Jaru

The unfortunate incident involving the collapse of a Church founded by Prophet TB Joshua that happened over 2 weeks ago is sad as many lives were lost and many more wounded.

The actual cause of the collapse is still unknown. The Council for the regulation of Engineering in Nigeria has vowed to investigate the matter over allegation of violation of building standards.

Initially, the prophet was so confused to the extend that he didn’t find time to explain the cause of the matter. According to some media reports, he later said it was the enemies of God that caused it.

Just yesterday, I saw it on the media quoting Joshua saying it was caused by UFO. Some reports have it that it was TB Joshua’s fault. Because he turned a 2 story building into 6 story building.

Whatever might have been the cause, what was more surprising was the fact that the Prophet didn’t see it coming talk less of preventing it.

I learnt that most of the victims where from South Africa where a Nigerian plane was recently impounded with 10 million dollars.

I am stopping here before the Prophet prophesies any thing against me.

But can the Prophet too tell us when Nigeria will become a corruption free country?.