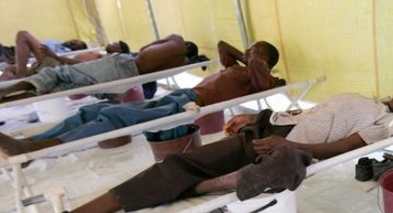 19 suspected primary carriers of Lassa fever in Ogun State, have been placed under intensive surveillance.
The 19 suspected carriers are a student of Federal University of Agriculture, Abeokuta, FUNAAB as well as 18 other health workers, who are all personnel of Ahmadiyya Hospital, Ojokoro, Lagos State.

The state Commissioner for Health, Dr. Babatunde Ipaye, who revealed this to newsmen during a press briefing Tuesday morning declared that Ogun state is confirmed free from Lassa fever.
He also revealed that all the 18 suspected personnel are workers of the Ahmadiyya Hospital, Ojokoro, where the first index case in Lagos was discovered, but living within Ifo and Ota axis of Ogun State.

The Commissioner stated that all the suspected carriers have been kept under intensive surveillance in the last 12-14 days, and noted that the incubation period for the confirming the disease is 21 days.

“They have been put under surveillance in the last days. One Disease and Notification Officer is attached to each of the 18 primary contacts. They are workers of Ahmadiyya hospital, Lagos who reside in Ogun state.

“They came in contact with the disease while working. We are monitoring them, they have between 7-9 days to be fully observed before being confirmed. But as we are speaking, all the cases have been confirmed negative.

“The state government, being responsible and responsive needs to keep the public and its people aware of the situation of the issue as it progresses.

“So,let me use this medium to call on everybody in the state to urgently report any suspected person with symptoms of Lassa fever like bleeding from the nose, vomiting, complaining of headaches and so on to any nearby hospital or call the emergency Lassa fever phone lines,” Ipaye said.

He disclosed that the two suspected cases,which were discovered two days ago have been confirmed negative.

The two victims are a 7-year-old boy in Abeokuta, who was taken to the General Hospital, Ijaye, while the second one was a 10-year old girl who travelled down from Kaduna.

According to him,”the girl has confirmed that she is having acute fever. Her case is not a critical symptom of Lassa fever. She has a story of taking blood tonic, which made her blood to be black.
“She has been tested and confirmed that she has no such disease.

“For the boy, he was admitted at the Olabisi Onabanjo University Teaching Hospital, OOUTH, Sagamu and several tests have been conducted on him. From all the tests conducted, it has been confirmed negative.”
However, Ipaye has declared that the state is not thinking of going the way of Lagos state by killing rats.

“Waging war against rats now is good but not the panacea. What we need to do is to be more hygienic in our dealings, environment and food must be fully protected against the rodents,” Ipaye advised.