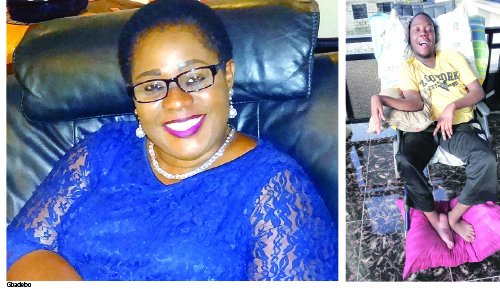 Alaba Gbadebo is a strong woman with deep love for her children and humanity.

19 ago, she had a baby with cerebral palsy, and playing the sweet mother, bluntly turned down all advice and pressures to kill the child at infancy. Instead, she resigned from her lecturing job at Bayero University, Kano and denied herself of all social activities, to enable her cater for the baby, with spastic paralysis.

The child, Olaoluwa, was born with brain disease called cerebral palsy, which experts say, could have been avoided if a pregnant woman had taken enough doses of folic acid or oranges.

At 19, the boy can neither talk, feed, bathe, take his drugs nor do other things by himself without assistance, which means he needs 24-hour care to survive.

Alaba’s heart-rending story in this interview with Abuja Metro will encourage any parent facing similar challenges, especially those who do not know what to do.

Before now, did you know anything about cerebral palsy?

No. It’s quite amazing because I was a lecturer for years but never heard about it until I had my son. So, when he was diagnosed with the disease, I reached out to my late senior sister, who was a medical doctor and asked her what cerebral palsy was? When she heard my question, she started shedding tears. You know, when something does not really affect you, there is tendency of not knowing about it, but now, because of my son, a lot of people, including friends and family members now know what cerebral palsy is all about.

How did you react when you were informed that your son had the disease?

At first, I thought it was something that could get cured, maybe within two to three years. I almost went into denial and uttered words like “God forbid, devil is a liar.” But in the end, you accept reality. Some people would attribute it to not praying very well. Actually I have not seen in any of these prayer houses, where people diagnosed of cerebral palsy get healed, but God will make it easier for the child and the parents as time goes on. This is because brain damage is a very terrible thing, but part of the brain that is damaged might be bypassed by the body later and you will be able to do some other things. But the damage is still there. So, when I decided to face the reality, I started looking for help for my son.

Where did you go to for help?

We started looking for medical help, and as I was praying, people, friends and family members were also praying for us. But, it was a medical thing and I realized from the beginning that help would come. God can do anything, but I have to do my part.

We started when he was six months old, and that was when he was diagnosed. We had him in Kano because we used to live in Kano. When he was three months old, he did not have neck control. You know there are usual growth and observations that normally go with a new born. But, when he was three months and there was no sign of such, we became worried. We later went to Lagos to see a neurologist, and that was when we were told that he had cerebral palsy, a sort of brain damage. And it’s been 19 years now.

Did you visit prayer houses?

Due to my upbringing, I pray very well and if you want to pray for my son, so long you are not a fake, you can come and pray for him; but I never brought myself so low to go to all these charlatans in the name of prayers. My friends and family were also praying for him.

There was a time one of my friends introduced me to one of these pastors in the Redeemed Christian Church. He prayed for him and we kept on praying but, I never believed in going from one prayer house to another because it will just increase your problems. It will even degenerate more, when you start meeting a lot of charlatans and all that. There are things that are practical, which one needs to do by his/herself; not only prayers.

So, we started going to hospitals. We took him to Britain and lived in Britain for about five years. We did everything and he was going to school there. When he was 13 years old, he was to undergo a surgery in Britain but it did not work due to some complications and disagreements in methodology. Later, we came back and went to India about eight years ago. We did the surgery in India. It was successful and it lasted for eight hours.

We had also taken him back to India on several occasions, but he is 19 now and we have been managing him. It is just that in Nigeria, it is a very difficult thing to handle. You are on your own, no help, no government’s subvention; so you have to do everything. And that was why we started Benola (an organisation), because we know that many parents are very poor and do not even know what to do. Sometimes, they neglect, abandon or even kill them (babies). But, if they see that people survive, they will be encouraged to give their best to their child. It might not be a great experience but it is good you take care of your child. It was not his fault. So, Benola is there to encourage parents and motivate them in doing the best they can.

Yes, there might not be cure, but the child is there; so, it is your responsibility to take care of him. Even if the government is not there, it will listen to us if we start talking out and making it known to the public. That is when people in the wheel chair can be extended the privileges others are enjoying and have independent life. It is not over until it is over. You cannot condemn people. And our people are not helping matters. If you have a child, who is challenged, you do not lock him up for years. They do not know anything, nobody sees them; and those children do not die on time. God has a reason for keeping them, although some people kill them.

But, it is more appropriate to do the best you can. That is why Benola is in place, so that when you come complaining, I will just bring out my child in less than three minutes, to show you that I am also involved. Why should I hide him? It was not his fault and it was not my fault. I took him to the best hospitals, I did everything the doctors said I should do. I have had children before and I also took appropriate medications. So, God knows the reason for that. What my husband and I concluded was that maybe, God wanted to do something in the lives of those with brain damages; that is why he allowed such to come to us. There is a saying that the journey of one thousand miles begins with a step. And that is why we are out to protect and call for the rights of these children. You must make provision for people who are disabled, to enable them go to anywhere they want to go. That is why rams need to be provided everywhere, so as to help them participate in worship centres, use public transport, among others. Abroad, they do not hide anybody; everybody has the freedom of movement.

What has this cost you and how has it affected your person?

Material things, though it does not matter. He is my son and I have to do anything to keep him. I do not hide him and we have to take care of him as long as we can. My only prayer is that I do not want to go before him because I do not want him to be a burden to his brothers. He is my responsibility as long as I am alive. We are coping, though it has cost a lot; but I am not going to quantify it. For a long time, I hardly go out. Right now, I have two nurses and boys at home. We started using professional nurses and boys to help out. He takes about 25 tablets that do different works every day and to also put him in order. We have been using professionals for over 13 years. I was a lecturer, but after having Olaoluwa, I had to resign because I knew I do not have to be away from home. But now, I have shops and I am self-employed. But you cannot quantify love. We cannot quantify the cost and social consequences. In life, you get to a stage and realize that life is not a bed of roses. I reason that way but I pray it ends well and that I do not go before him. He is always happy and cheerful.

How does he express his happiness?

He smiles and blows kisses in the air. He understands us and equally calls us ‘Mama’ and ‘Papa’. I look at it with an eye of maturity now. Life is all about adaptation and I look at it and adapt.

Has anybody advised you to do something sinister?

Yes, when he was young. One of my friends, a nurse (and she is still my friend), said that they know what to do…. But I said no, that he is my son. I had three children in 15 years, so child bearing was not easy for me. I reasoned that since he was already born, he would live.