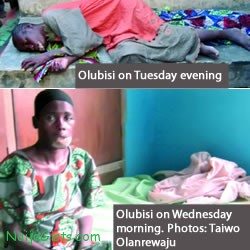 A popular insane (mad) woman identified as Olubisi Aina has regained her sanity after she was hit by a car in Sanyo area of Ibadan city, Oyo State, Nigeria last week Monday. naijagists.com

After the day break, she usually retires to a corner near Damo River , a routine she never missed.

On Monday last week, Aina was sleeping very close to her usual spot when she was hit by a speeding taxi.

In the accident, Aina’s legs and mouth were badly injured. She was immediately rushed to Oore Ofe Hospital in the area where she was admitted for several days.

On the day of her release, the hospital’s matron, one Mr Toyin Adesina told her to have a bath which she did and miraculously she gained her sanity back.

Olubisi Aina was escorted to her usual resting spot, the Damo River where she was given a sponge and soap to take her bath.

In the process, someone said Aina said “Thank You God” in her native Yoruba language and from that moment, she began speaking normally.