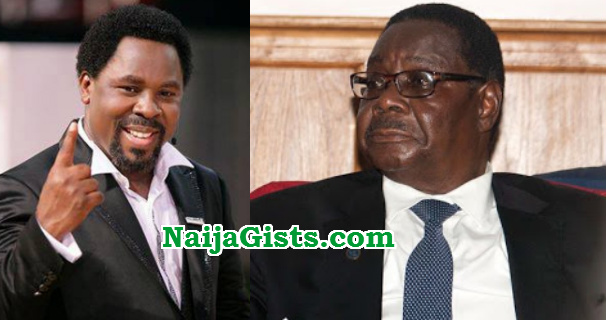 On a live broadcast in Malawi yesterday, President Peter Mutharika blasted TB Joshua for allegedly prophesying his death and that of Mugabe.

In January 2012, TB Joshua predicted the death of Mutharika’s brother, Bingu who died in the predicted timeframe, giving TB Joshua a strong stand in Malawi.

Though he didn’t say when or where Temitope Joshua made the latest prophesy, the President told his country men and women that the Nigerian prophet has predicted his death.

“I’m told there is a man in Nigeria called Joshua and he is saying that Zimbabwe President Robert Mugabe and Peter Mutharika will die before April 1,” Let me tell you, Joshua… you will fail. What you did in 2012 will not happen again this year,”

But Mutharika questioned Joshua’s credentials as a prophet, pointing to the collapse of a guesthouse in his sprawling SCOAN in Lagos in September 2014, which left 116 people dead, mostly South Africans.

“Why did he not foretell this tragedy?

“This all shows that he is a liar. He just wants to raise money,” – said Mutharika