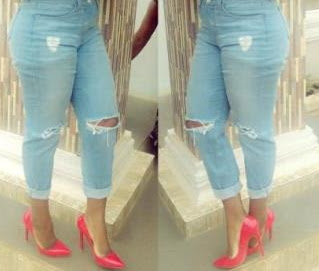 A former banker, Mr. Ebenezer Olotuyemi, yesterday told an Agege Customary Court, Lagos, that his wife, Osi, was not a godly woman. According to him, his wife has been engaging in worldly activities like wearing of jeans trousers. Olotuyemi also told the court that his wife did not love and respect him.

He prayed the court to dissolve their 16-year-old marriage which is blessed with two children, 10 and 15 years. The former banker, who is the defendant, said that there was no love any longer in the marriage.

“She is a worldly woman, who doesn’t go to church, and but loves to go out all dressed in jeans trousers.”

However, Osi, who filed for the divorce, complained that she was tired of the marriage.

“He is too judgmental and he gets too aggressive at every little thing. He is a stubborn and troublesome man.” Osi also said her husband had not been taking responsibility of the children as he left them in her father’s house, for over two months now. “He has threatened my father’s life,” she added.

The court, having seen that both parties consented to the termination of the marriage, adjourned the case till October 11.

The court also told Olotuyemi to write an undertaking that prior to the date of the adjournment, he must not be found around his father-in-law’s house and around the kids, else he would be imprisoned for three months without any option of fine.