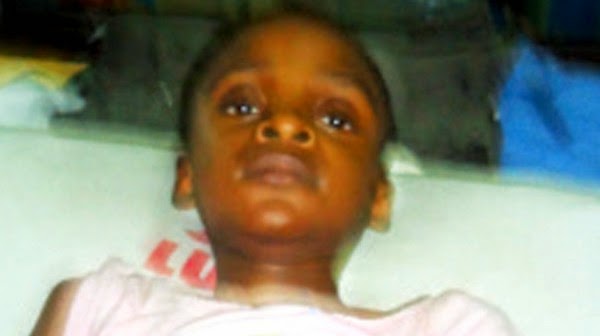 A JSS 1 student of Glass House Secondary school in Mile 12 Lagos has passed after 6 years of intense battle with pain and 4 weeks of medical treatment in India.

The 11-year-old young girl, who lived with her parents and siblings on 17, Olagunju Aina Street, Agiliti, Mile 12, was diagnosed of a heart disease about six years ago. After several years of agonising search for help, a kind-hearted Indian woman single-handedly sponsored her treatment in Nanyara Hospital, Bombay, India.

She died a mysterious death at LUTH this week after over 4 million naira was spent to bring her back to health.

“We suffered greatly to seek help when Mary was sick. It appeared like our world was crashing. We are both fashion designers and couldn’t even have time to sew clothes for our customers when the predicament began. We spent our time, attending to her, taking her to one hospital or another and from one foundation to the other, seeking financial help,”.

“She was a very brilliant, peaceful and well-behaved girl. She just gained admission into the Junior Secondary School at the Glass House Secondary School, Mile 12, Lagos, before the ailment struck.”

“She had been a very healthy, playful girl until she turned five and the long nightmare began. She used to cough heavily, sweat profusely and breathe unsteadily. We didn’t know what caused that but we were always rushing her to the hospital whenever those symptoms came up. She would cry and ask for help, complaining that she was having pains all over her body.

“That continued for sometime on a regular basis until last year November when we again rushed her to the General hospital in Ikeja and they referred us to the Lagos State Teaching Hospital (LUTH) for a comprehensive medical test.

A good Samaritan offered to sponsor her treatment in India.

Hear her father narrates how she died below:

“Two weeks after her treatment in India, she complained of severe headache and we informed the doctors at LUTH who though, were on strike, promptly began attending to her. We were at the hospital when she came to me, rested her head against my chest and said she just wanted to rest. She again thanked me so much for all the suffering I had gone through for her to get help. She also prayed for me and her mum. I didn’t know she was about to breathe her last.”

“The doctors and the Indian woman cried like a baby when she died. The Indian lady loved my daughter a lot that she even offered to bring her up as her own daughter when she fully regained her health. She shared the same date of birth with my daughter. That was the first attraction between them.

“Oh, how could death be this cruel to my daughter? But I accept whatever God offers me. Only God understands why Mary has gone. She simply told me she wanted to rest and I believe she is resting now in the Lord’s bosom. That is why I prevented any medical test offered by doctors to detect what killed her,” the father of the deceased said

May be she has decided to stop troubling her parents…..How can she just die like that.

May her soul rest in perfect peace and may God restore her parents.