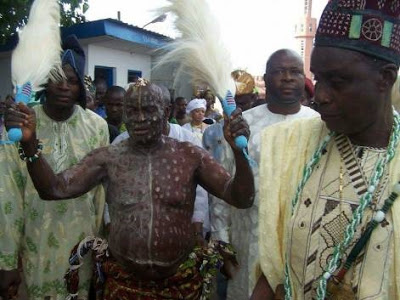 August 14, 2015 – Missing Abobaku Found At Ooni Of Ife Palace, Man To Be Buried Alive With The King Today

An elderly man scheduled to be buried alive with the king of Ife, Oba Okunade Sijuwade has returned.

According to palace sources, the runaway chief was found late last night inside one of the sacred houses in the palace.

He however refused to perform his duty, insisting that the late monarch being a born again Christian had warned traditional chiefs to stop using human being for sacrifices.

A guard at the palace said the Abobaku will still be buried alive with the king today in accordance to Ife tradition.

Will bring you photos from the event shortly.